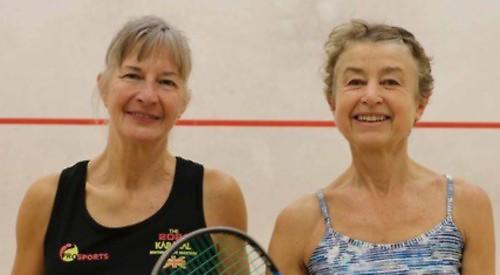 The Henley Squash Club member from Bix made it back-to-back wins at Colets Health & Fitness Club in Thames Ditton having won the title last time out in 2019.

Campion breezed through her quarter-final match against Maureen Duke (Essex and Ireland) in just 14 minutes, playing an impressively accurate and varied game.

In the final Campion came up against Lesley Sturgess (Durham and England) who upset previous form and seedings to beat double National Champion Sian Johnson of Wales.

Sturgess won the first game 15-13 before Campion hit back to win the next two to lead 2-1.

Sturgess fought back in the fourth, wining it 11-9 but in the deciding fifth Campion managed to steady her nerves and edged ahead playing controlled squash to win the final set 11-7.

Speaking after her win, Campion said: “The British Open is a hugely prestigious tournament, right up there with the Worlds and the Europeans. Most of the top players in my category are British and so were able to compete in the tournament.

“I went into the tournament feeling slightly underprepared, as I had had minor aches and pains since September. Luckily, I felt fine during the tournament and my performance in the quarters and semis boosted my confidence.

“Lesley is a highly experienced player and she reads the game very well. We always have close matches and I luckily managed to control the game and the vital moment in the fifth. It is great to be back playing major tournaments again after a two-year hiatus.”

This was Campion’s fourth British Open Masters title, having won it twice in the over-55s category.