Straight off the page 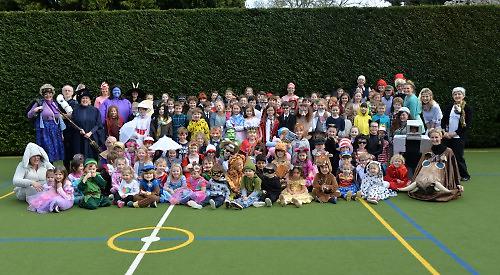 ASLAN the lion, Mary Poppins and the Hulk were among the characters created by pupils from at St Mary’s School in Henley.

Up to 140 children and the members of staff dressed as their favourite literary figures.

Headteacher Rob Harmer said: “They were wonderful. It was just great to see all the children and staff getting involved.

“It is always a challenge for parents as well and I think they and children did very well.

“Each class shared a poem with us, which was really lovely. It’s great to be reading and sharing stories and it’s a fun day — extremely positive.”

Above s the whole school and, right, Louis Ball, six, as the Hulk, Ruby Newman, eight, and Kirsty Broom, five, as Mary Poppins, Charlotte Creau, seven, as the Grand High Witch from The Witches, Charlie Burkitt, four, as Aslan from The Lion, the Witch and the Wardrobe, Year 3 teacher Rosie Wilkinson as Violet Beauregarde from Charlie and the Chocolate Factory and Sophie Broom, sevcn as Cleopatra.