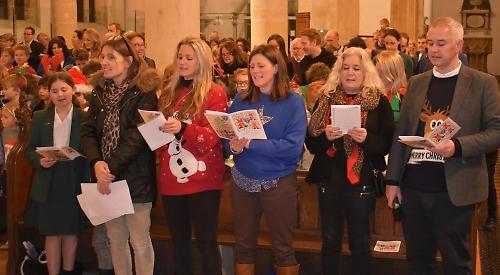 A CHRISTMAS carol service was held at St Mary’s Church in Henley for children at St Mary’s School and their families.

Pupils and staff came dressed in Christmas jumpers and sparkly outfits and some wore reindeer antlers and festive hats.

Children from every year group performed. Nursery pupils sang Little Donkey while those in the kindergarten sang Away In A Manger.

A reading of Happy Christmas by Ian Larmont was given by Ruby Newman and Matilda Darrah from year 4.

Some of the children from year 5 and 6 treated the audience to readings, including How The Grinch Stole Christmas. In between the children performing the congregation sang carols including Silent Night and We Three Kings.

The service was organised by the Friends of St Mary’s School and those present were greeted by Rev Jeremy Tayler, the rector of Henley with Remenham.

Headteacher Rob Harmer said: “We were delighted to see such a fantastic turnout of parents and grandparents to support the children in the beautiful surroundings of St Mary’s Church.

“Our school is proud to be at the heart of the Henley community and we were particularly touched at the generosity of the children who collected gifts for the charity Helen & Douglas House.”