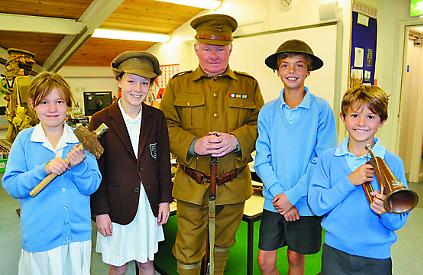 AN amateur historian dressed as a First World War soldier as he gave a talk to youngsters about a British Tommy’s life during the conflict.

Mike Willoughby, from Woodcote, spoke to year six pupils at St Mary’s School in Henley and took along memorabilia from his own collection for the youngsters to look at. He said: “I showed them what a soldier’s life was like, what he wore, what he carried, what he ate and how he generally coped with the situation.

“I don’t talk about the war as such but tell them about the soldier’s equipment and experience. I always find the children very receptive.”

Key stage two teacher Judith Farnath said: “It went down very well. To have somebody in front of them dressed up and to be able to try things on and touch things brought it all to life. It was fascinating.”

The visit was part of the Lest We Forget project, which aims to commemorate the servicemen from the area who died as a result of the war.