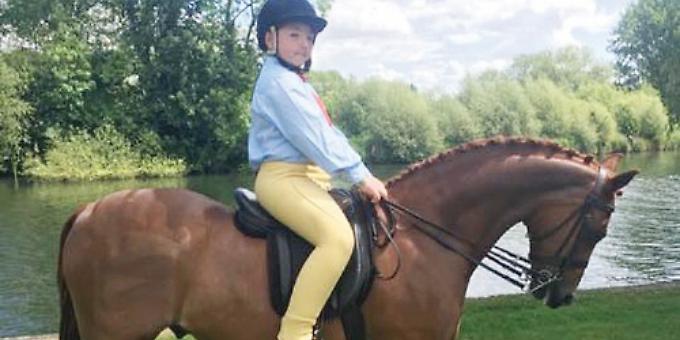 DOGS were banned from the Royal Windsor Horse Show in 1944 after a lurcher stole a piece of chicken from King George V’s lunch plate, writes Amanda Stewart.

However, I doubt that was on the mind of 12-year-old Leo Selcon-Park as he rode like the wind, winning his first ever rosette at this prestigious event.

Autistic Leo from Highmoor, near Nettlebed — who was taught to hold his reins as if they were Toffee Crisps — rode his 13-year-old chestnut pony Telynew Zefferelly (aka Frank) into sixth place, thereby earning him a much-coveted rosette in the Woodhouse Show Hunter Pony Class held on the Sunday.

Meanwhile, two days earlier, international horse transporter Claire Whatley had set off from her yard in Stoke Row at 5am in order to compete in the Landrover Mountain and Moorland Welsh Cob — D class held in the Adelaide Arena.

Kylebeck Celtic Prince (Ronnie to his friends) won the best yearling award as well as fourth place overall in a strong class.

Claire and best friend Ciara Livingstone, who works for the Sultan of Oman in Wargrave, and who are not unused to early starts, then drove to the sales in Wales the next morning and bought another youngster, Rhoswen Govenor, who was bred by David Oliver.

This Welsh Section C gelding’s sire is Moorcroft the Master, who stood Reserve Supreme at Windsor. Last, but by no means least, I spotted the immense presence of the Drogheda Golden Charm owned by Lisa Barsoum and Rob Allen of Lower Assendon.

Rob, a doctor by day, showed this mare in true Welsh style and gave such an impressive performance that the pair not only won their class but also took the group championship.

She subsequently has been shown and produced by the Barsoum family with considerable success during 2016, including a ninth place (out of 73 entries) in-hand and a sixth place (out of 60 entries) under saddle at the Royal Welsh Show, the breed’s famous and premier show.

Charm has also now been scanned as safely “in foal” to the London Stud’s Swanhill Golden Rocket, just two days before taking the breed championship at Windsor.

She will be lightly shown during 2017, with her foal due in April.

n The Royal Windsor Fun Ride taking place tomorrow (Saturday) has had to close its entries early and won’t be accepting any late entries as they are totally full. This is my event that I run by kind permission of Her Majesty the Queen. For more information, visit the Berks and Bucks Draghounds’ Facebook page.