Leo has 'golden ticket' to the Horse of the Year Show 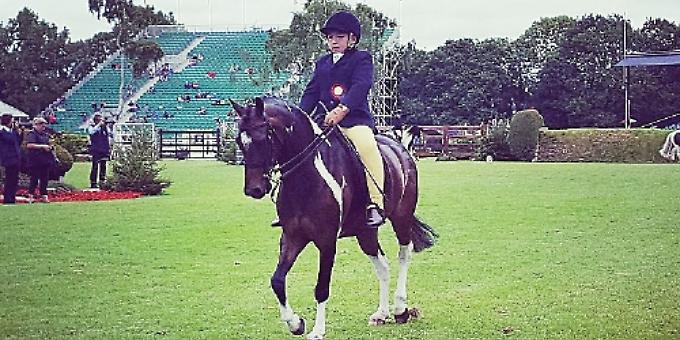 NOT only has Leo Selcon-Park now competed in the international arena at Hickstead, he is truly flying after winning a ticket to the Horse of the Year Show, writes Amanda Stewart.

In horsey circles, such a ticket is the equestrian equivalent — or better — of finding the golden ticket to Willy Wonka’s chocolate factory. At least, that’s how it must seem to
12-year-old Leo of Nettlebed.

He won his class, competing against both children and adults alike.

Leo will now be off to the bright lights of the National Exhibition Centre at Birmingham in October in order to compete for the Coloured Non-Native Pony of the Year title.

To win or even compete at the Horse of the Year Show — HOYS for short — is the dream of most riders.

HOYS was originally thought of by Captain Tony Collings as he believed there was a need for a “celebrated” end of year show.

The main equestrian competing season is of course over the summer months, and so it was agreed that this “champion of champions” show be held in the autumn.

Hence the show always being indoors, with previous venues such as Wembley when it was often filmed for prime-time television.

In the world of private driving, Rebecca Gibson, 34, from Sonning Common, who can often be found with her pony and trap whizzing around in the Wyfold area, has just also picked up a fantastic first prize for the concourse class held recently in Warfield.

“Beeching Bobby Sox”, a nine-year-old Welsh Section A also finished fourth in the exercise class and third in the Welsh class. Becky’s next show is at Windsor, where of course Prince Philip, himself an avid carriage driver, pays keen attention to the sport.

Christina Berry from Emmer Green and her pony Molly have been in partnership for just over a year.

She was offered to the ultra-keen Berry family, who base their horses at nearby Friar Park, after their previous pony Ollie had to be retired after sustaining an injury.

The Royal Windsor Fun Ride held in Windsor Great Park, which was organised by Stable Talk correspondent Amanda Stewart with the Berks and Bucks Draghounds was a huge success.

The days saw more than 300 riders enjoying the jumps and navigating the water section, as well as the newly built castle jump!

Such was the success that there is talk of it being organised as a two-day event in the future.

The recent heat has of course been difficult to cope with, as many riders choose to ride out in the very early hours of the day, or of course as at Cane End Stud one can always sit in a mucking-out wheelbarrow and simply have it filled with water — as
23-year-old Katherine Cooksley chose to do!