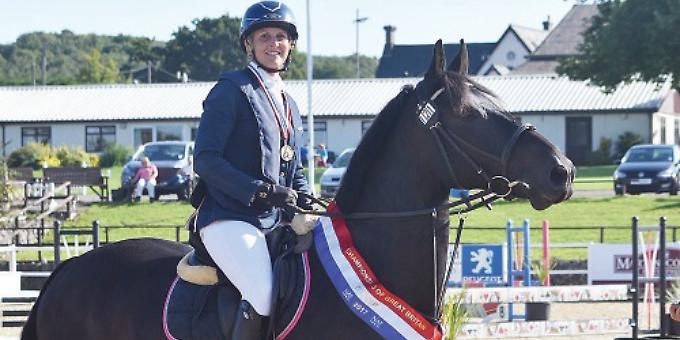 In their first heat, Mel and Joe were drawn first to go.

They laid down the gauntlet with a technical but sensible round and held their winning position through to the end — having to watch another 40 competitors try and beat their time.

The beautiful, but sometimes troubled and difficult seven-year-old horse, who stands at 16.3hh is a black Fresian crossed with an Irish Draught horse. Known affectionately as Joe, he was originally bought as a “project” by Anne for the princely sum of £1.

However, move on two years and they have enjoyed numerous successes in many disciplines, having now recovered from quite a number of behavioural issues — including refusing to hack solo.

Mel and Joe won three out of four of their heats and came second in the last heat to take an impressive “overall gold” in both of their sections.

With over 900 competitors attending the championships, there was always going to be stiff opposition.

All in all they completed a record total of six laps of honour over the weekend.

Thrilled owner Anne says that Joe is her saviour and sanity — and despite having his “moments” he is an incredibly giving and honest horse, along with being hugely affectionate.

Melanie also adores Joe and both owner and rider really enjoy providing competition support for each other when riding in each of their own disciplines.