Ribbons and trophies testify to a family team effort 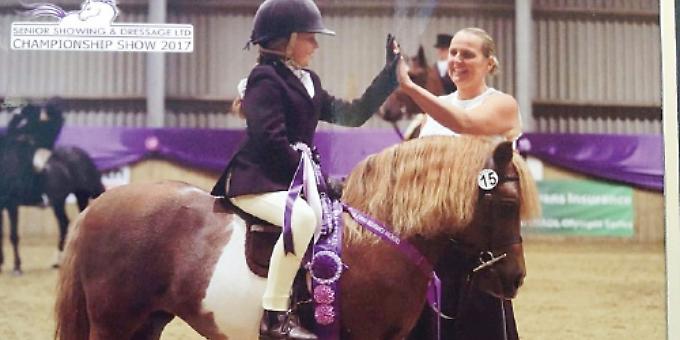 CARMEN Streams of Woodcote has enjoyed numerous successes in the showing ring and is fairly synonymous with the native breeds of this country.

Any number of competitors will remember Carmen’s considerable successes with Welsh Section D Rainhill Fireaway and Trefrifawr Comet — including their regular appearances at the Horse of the Year Show.

However, this time, it is Carmen’s nine-year-old daughter who is scooping up vast numbers of ribbons and trophies.

Gavina Semonella will be competing at the exciting and televised Olympia later this year as her last year in the lead rein class comes to an end.

Gavina has enjoyed the closest of relationships with Burnside Lara — a skewbald 15-year-old registered Standard Shetland — since she was two.

They have to date picked up Overall Supreme Champion at the Welsh National Shetland Breed Show last year. They were also Reserve Supreme at the Royal London and won the final at Equifest.

Gavina, who has two ponies, has also enjoyed a more steady success with her other lead rein pony, bay Welsh Sec A Forlan Honey Monarch.

She is of course superbly supervised by Carmen in an all-round family team effort. Gavina also qualified for the Royal International at Hickstead, resulting in a third placing and highest ride mark.

All in all this team have so far this year picked up the following: Lead Rein Reserve Champion in the final lead rein at the NPS Winter Championships; second place at Kent County; first place at Bakewell Show; Reserve Champion at Brackley Show; and joint second at Brook Farm Show.

They ultimately took the prize of Ridden Reserve Supreme of Show, beating 30 others in the championships.

Equally, the family have owned Lara for around 10 years and they’ve just starting her jumping — resulting in even more success with their winning their first ever Working Hunter Class.

HR Manager Shiplake College is looking to recruit a proactive, friendly and efficient professional to deliver a high ...