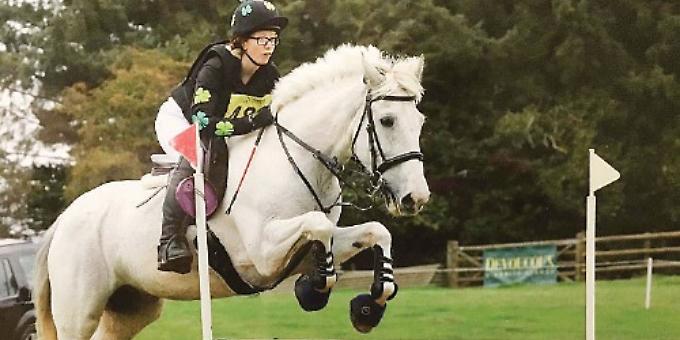 ELEANOR PETERS, aged 16 from Cane End Stud, caught my eye recently as she and her trusted Irish Sports Horse Silver Ghost, aged 12, were in the ribbons at Swalcliffe Park One Day Event.

Young Ellie was in a strong class of 45 competitors and her dressage score was 35.8, then followed the showjumping whilst mum Sarah, who runs Cane End Stud, looked on.

Sadly, a stop at fence five gained the pair four faults but they were still optimistic for a placing in the top 10 as they waited for their turn on the cross country course.

Sarah dutifully followed Ellie to the start countdown, video camera in hand, heart in mouth and then the pair were off!

Sarah says: “Ellie and Ghost flew round coming through the finish with no penalties and well within the time allowed. We were over the moon as this was Ghost’s only second time on a cross country course.”

They kept their eyes on the scoreboard and the pair rose to seventh position, soon they were in third position which is where they finished and both mum and daughter were rightly ecstatic. Ellie is now determined to continue eventing.

Meanwhile, the Berks and Bucks Draghounds secured another Windsor ride for 2018.

The annual equestrian meeting was held at the Crown Estate offices on October 6. This is when of all those who are granted permission by the estate to hold their events by kind permission of the Queen, including Royal Windsor Horse Show and Guards Polo. I attended the meeting and am delighted to confirm that my “fun-ride”, which saw more than 300 horses attend again earlier this year, will be going ahead again in 2018. The “Windsor Castle” feature jump is proving ever popular.

Next weekend will mark the opening of the hunting season. There are two local hunts in your area, the Kimblewick Hunt and the Berks and Bucks Draghounds. As with most hunts across the country, the opening meets will be taking place.

There are three new masters at the Berks and Bucks Draghounds this season and their opening meet will be held at Brockhurst School in Bucklebury on Sunday, November 5 and I will be there with my camera.