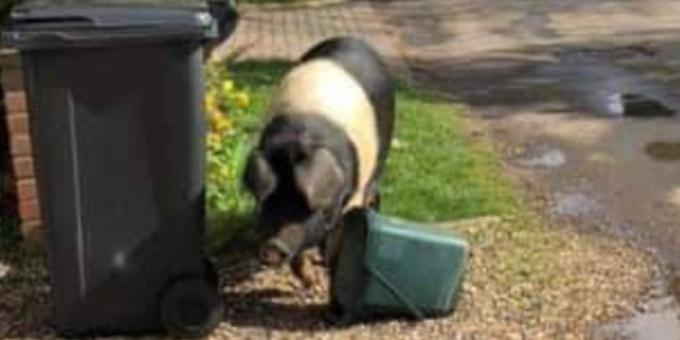 LUCY, a two-year-old Saddleback pig from Woodcote, made a bid for freedom on Friday, March 8, which incidentally coincided with ‘International Women’s Day, writes Amanda Stewart.

Perhaps smelling the spring air or feeling it was time to broaden her horizons, Lucy abandoned her eight piglets and took off — albeit fairly slowly — from the comfort of her stable in Woodcote and meandered with undeniable purpose around the village, giving locals quite a surprise as she is no small pig.

The local social media group for Woodcote, more accustomed to articles for sale, was quickly full of photos of Lucy, who by now had ambled a reasonable distance from home, asking if anyone had “lost” or “misplaced” a pig?

Fortunately, June Mayle, a local resident who has owned Lucy since she was a weaner, was nearby and quickly came to the rescue.

June said: “I’m lucky she’s such a friendly pig, so it was relatively easy to persuade her to return home to her eight hungry babies.”

June keeps other pigs and horses too, but just Lucy and her eight-week-old piglets in Woodcote.

“She’s ordinarily a great mum,” she added, “and this is her second successful litter. Last year she had seven piglets.”