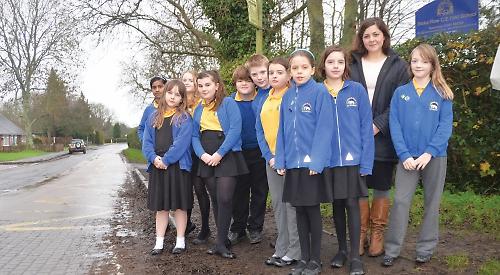 A VILLAGE school has been awarded £5,000 for a new lollipop lady following a campaign.

Stoke Row Primary School was given the money by Churchill Insurance as part of a pledge by the company to help improve safety on school crossings across the country.

Parents have been worried about the safety of their children walking to the school since its lollipop lady retired two years ago.

The entrance is on the main road through the village and emerges on to a narrow verge barely wide enough for one adult and with a pavement on only one side.

The school asked Oxfordshire County Council, the highways authority, for a replacement but was told the village was too quiet and rural to justify the cost after the funding criteria were tightened as part of government cuts.

A year ago it launched a fund-raising campaign to raise £10,000 for electronic signs to deter speeding drivers.

Headteacher Charlotte Harris said the latest grant meant enough money had been raised for not only the flashing 20mph signs but also to employ a crossing patroller for a year.

She said: “We’re absolutely thrilled to be awarded the money for the safety of the kids. It’s very much needed.

“Because it is a fast road it’s really an ongoing concern for us. It’s the main road through Stoke Row that people use to travel to Reading or Oxford.

“There’s a point where it’s raised and people see it as an unofficial crossing. Cars stop and people behind don’t realise and try to overtake.”

There is also no street lighting and the school is on a blind junction so drivers are less likely to see a child running out.

The road has a 30mph speed limit currently but parents have said this is too high and that drivers ignore it.

Concerns were first raised after the school’s lollipop lady retired at the end of 2014. Highways England assessed the site and suggested improvements that the school could pay for.

A zebra crossing was ruled out due to the lack of street lighting so two flashing signs either side of the school entrance were recommended.

A 20mph limit is not legally enforceable but the parents believe the new signs will encourage drivers to slow down.

The fund-raising campaign was led by the Friends of Stoke Row School, who submitted the grant application to Churchill.

A Churchill Insurance spokeswoman said: “Lollipoppers are still the stalwarts of our communities, national treasures who bring fun and joy to the school run as well as playing a vital role in protecting our children.

“We are thrilled to be providing the parents and children of Stoke Row with funding for a lollipopper and ask any members of the local community interested in filling the role to put themselves forward with the local council.”

The school has until January 31 to fill the role.

Meanwhile, Stoke Row Parish Council is to receive £8,000 for a sports area at Cherry Orchard, off Cox’s Lane.

The money comes from the Tesco’s “Bags of Help” scheme in which customers drop a token in a donation box at the Henley supermarket for one of three causes.

Designs for the sports area will not be produced until after villagers have been consulted.

It will be next to a £48,000 play area which opened in October and was funded by the parish council, South Oxfordshire District Council and private donations.

Parish councillor Catherine Hale said: “We’re naturally very pleased to have won the money but nothing is set in stone at this stage.

“There will be a collaborative process between residents and the council to decide what will happen next.”