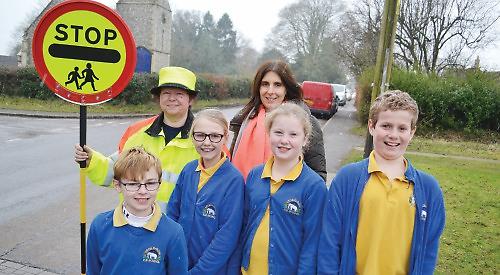 CHILDREN at a village primary school can now get to school safely with the help of a new lollipop lady.

Wendy Ayre-Tilbury has begun overseeing the arrival and departure of pupils at Stoke Row primary after the school was awarded £5,000 by Churchill Insurance.

Parents had been worried about the safety of their children walking to and from school since its last crossing patroller retired two years ago.

The entrance is on the main road through the village and emerges on to a narrow verge barely wide enough for one adult and with a pavement on only one side.

The school asked Oxfordshire County Council, the highways authority, for a replacement but was told the village was too quiet and rural to justify the cost after the funding criteria were tightened under government cuts.

Churchill Insurance offered the money as part of a pledge to help improve safety on school crossings across the country. A grant application was made by the Friends of Stoke Row School, who had been running a £10,000 fund-raising campaign for two new flashing 20mph signs.

Mrs Ayre-Tilbury, from Nettlebed, said: “The job came up and I thought I could help. It’s something that’s desperately needed and I thought I would be an asset to the school. It’s a fast bit of road and very, very dangerous and the cars didn’t used to stop.

“My job is to make sure parents and children, or anyone else who wants to use the crossing, gets to their destination safely. You can’t miss me.

“Being a primary school and being on a main road it’s vital that safety is of paramount importance.”

Louise Chater, chairwoman of the Friends of Stoke Row School, said: “Road safety for our children is an absolute priority for us. There are people not from the village who drive through very fast and we’re on a junction.

“We have really missed not having a lollipop person. It’s really difficult when you’ve got more than one child crossing the road.

“We had a deadline of January 31 to spend the money and employ someone. We are really happy with Wendy so she’s here for a year.

“She is great as she helps educate the children. It’s just so much safer. We’re really delighted and we feel very lucky.”

“Nobody used to stop and it was a bit chaotic,” he said. “Now all the cars do stop so it doesn’t take five or 10 minutes to cross the road.”

“There are lots of people in year six who walk home so it’s a lot safer for them having someone to help them cross the road.”

Freddie McGregor, 11, said: “It’s a lot easier to cross the road now. Before I had to wait for 10 minutes for the cars to stop for me.

“Wendy has a magical charm that makes them stop!”

Lucy Brooksbank, of Churchill Insurance, said: “We launched this campaign to take a proactive approach to protecting children during the school run and it’s great to see the product of our work in action.

“We’re sure Wendy will be a fantastic addition to the school run and local community.”

The Friends hope the 20mph signs will be in place by Easter.

The road has a 30mph speed limit but parents have said this is too high and that drivers ignore it. The 20mph limit is not legally enforceable but the parents believe the signs will encourage drivers to slow down.