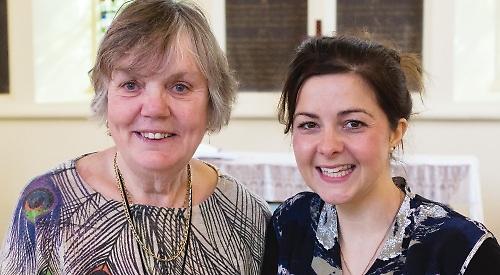 A TEACHING assistant has been honoured for her three decades of service to Stoke Row Primary School.

Jane Prior, who took on the job in March 1987, was thanked at a surprise assembly at the Church of St John the Evangelist on Friday last week.

The entire school and a number of former colleagues and parents attended the event.

A choir of pupils sang Here Comes The Sun by the Beatles, Sing by Gary Barlow and Randy Newman’s You’ve Got A Friend In Me from the soundtrack to Toy Story.

The children then read out a poem in praise of Mrs Prior, with each line beginning with a letter of her name.

Peter Allport, the school’s foundation governor, and Louise Chater, chairwoman of Friends of Stoke Row School, gave speeches of thanks before presenting Mrs Prior with vouchers for a champagne afternoon tea and a book of memories written by the pupils.

Headteacher Charlotte Harris thanked Mrs Prior for her “fantastic” contribution to school life and the support she has given to so many children over the years.

Teacher Eimear Morrin spoke of her “unbelievable passion and dedication”. The Friends group then unveiled a celebratory cake baked in the school colours before refreshments were served.

Every child was given a biscuit in the shape of the school’s elephant mascot made by parent Sarah Joyce. Mrs Prior, 64, trained as a nursery nurse in Reading and moved to Stoke Row with her late husband Roger 43 years ago.

She ran a playgroup in Checkendon for a time and was volunteering at the school’s library when she applied for her current role.

The couple had three children, Sally-Anne, Carole and Joanna, all of whom attended the school.

Mrs Prior, who was widowed three years ago, is also a member of the Stoke Row Women’s Institute.

She said: “The celebration was just lovely. I was genuinely surprised because I knew there was going to be a celebration but I didn’t know there’d be a whole assembly for me.

“They sat me with the children rather than up at the front so that I was able to enjoy it. I felt so proud and it was wonderful to hear so many lovely things being said.

“I just love working with children and always have done. I worked with the foundation class for most of my career but more recently I’ve been working with the older children, which I also enjoy.

“There has always been a fantastic team here. I’ve seen at least 10 head- teachers come and go but the school is in a very strong position and I intend to carry on working here.

“I’ve seen generations of families coming through and it’s such a privilege to watch them grow up and see them doing well.”

Earlier in the week, Mrs Prior and her colleagues celebrated her achievement with a dinner at the Reformation pub in Gallowstree Common.