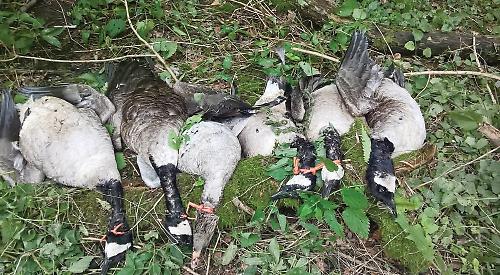 EIGHT dead geese were found dumped at the side of road in Stoke Row.

The birds, which had orange bailing twine round their necks, were left on a verge near Busgrove Lane and Emmens Lane on Friday.

A villager who found them alerted the police and the RSPCA, which collected the bodies on Wednesday.

Parish councillor Brian Foley said: “It’s disgusting and unbelievable that someone has killed them and then just dumped them.

“It looks like they had been tied around the neck so they could be carried.

“ I don’t know if someone had shot them but it looked like they’d been strangled.

“I have no idea why someone would do it. The only thing I can think of is that the geese have been killed for food or to sell, then the sellers have been disturbed while they were on a round and lobbed them.”