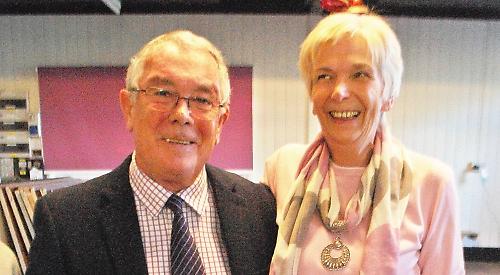 AN £89,500 extension to Stoke Row village hall has been officially opened.

Sponsors and supporters of the project, which started in October and finished in June, attended the ceremony at the hall off Main Street on Friday.

The extension at the back of the building includes a new meeting room and a large kitchen with an oven and range cooker.

The kitchen has been named after Trevor and Sylvia Miller, the chairman and treasurer of the village hall committee, and a plaque bearing their names will be erected above the door.

New toilets have also been installed and steps and a disabled access have been added.

The hall is regularly used by community groups including the village scouts, the Women’s Institute and Stoke Row Primary School.

Since the work finished, private bookings at the hall have trebled.

Bookings secretary Amanda Evans said: “We must give massive thanks to Trevor and Sylvia. Between them they’ve secured all the funding and project managed it, overseeing the build and buying all the white goods, fixtures, fittings and so on.

“They’ve been living and breathing this project for six months of their lives and we’re so grateful for their dedication.”

Mr Miller said: “It has been a long time coming but we’re very pleased to have finished it and we think we did a great job on a fairly limited budget.

“The feedback has been tremendous and we’re particularly pleased with the improved disabled access, which opens it up to a much wider section of the community.”

The work is the second phase in the ongoing restoration of the building.

Two years ago, timber cladding was attached to the outside and new glazing and insulation were installed at a total cost of £18,000.

The committee now hopes to buy new furniture, resurface the car park at the back of the hall and cut back an overgrown oak tree in the grounds, which will cost a total of about £4,500.

At Friday’s ceremony, the Stoke Row Racing Club handed over a £700 cheque and the WI donated £600 toward future works.