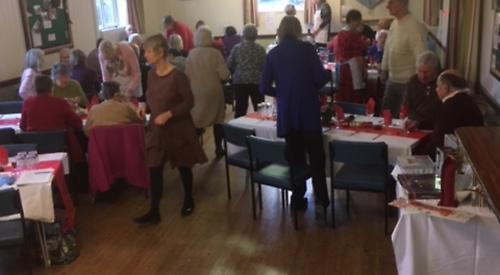 A FESTIVE lunch for the over-60s was held at Stoke Row village hall on Saturday, January 13.

The annual event was organised by Tilley Smith with help from the hall committee and other volunteers.

A glass of sherry was offered to the 50 guests and several carers on arrival thanks to a £30 voucher donated by Waitrose in Wallingford.

They then had a turkey dinner generously donated by Paul Clerehugh of the Crooked Billet pub restaurant in the village.

White and red wine was served with the meal, funded by a generous donation of £100 from Stoke Row Parish Council.

This was followed by several wonderful desserts, which were made by villagers, then cheese and biscuits. Finally, mince pies and coffee were served, also made by residents.

A sing-song was organised by Eddie Agar followed by a raffle of donated prizes.

The afternoon was hailed a great success by the residents who went home with very full tummies and armed with raffle prizes.

Special thanks was given to Tilley Smith for organising the event and many residents complimented the committee on the new kitchen and toilet facilities.