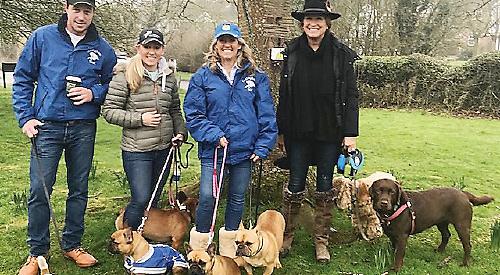 A NEW landlord has taken over at the Cherry Tree Inn in Stoke Row.

Dan Redfern, 41, has agreed a
10-year-lease with Brakspear to run the pub, which dates back to the early 18th century.

He has moved from Harefield in Middlesex, where he used to run a pub, together with his basset hound Crunch, and hopes his wife Aga, and children Molly, five, and George, one, will join him soon.

He said: “I just love the area and I’d love my kids to grow up here.

“I was looking in this area for some time and then the Cherry Tree came up and it ticked all the boxes.

“I was very attracted to the building and the size of the garden and the potential to grow the business. It needs some love and attention. The garden is rather exposed to the road so we’re going to put up a lovely picket fence and have a Ferguson tractor and lots of lovely colourful flower beds. I’m a very keen gardener.

“I’ve been blown away by the warm feeling people have had towards me being here and Crunch. Everyone has been so welcoming.”

Mr Redfern wants to use an unused plot of land near the car park to grow vegetables and herbs for the kitchen and hopes to keep pot-bellied pigs.

The interior of the pub has already been redecorated and now features antique tables and Persian rugs. The pub also has a new menu under new head chef Matthew Allen. Mr Redfern said: “Matthew is really driving the food quality forward and we have had a real spike in sales in the last two weeks. Everything is homemade, barring the ice-cream and the bread.

“We want to do pub food properly — we want to do the best fish and chips, the best sausage and mash, and to make sure there’s a respectable vegan and vegetarian offer.”

Mr Redfern worked for pub company Brunning & Price for more than 10 years and ran the Old Orchard in Harefield for six-and-a-half years and the Prae Wood Arms in St Albans.

He then ran an independent pub called the Green Man in Denham.

Before joining the pub industry he ran a fish wholesale and home delivery business in Manchester and before that a deli and catering business in Cheshire.

He replaces Doug and Lolly Green who had leased the pub through their business, Splash Inns, but put it up for sale last year.

In September the couple revealed they had sold the lease on the Little Angel in Remenham to Brakspear after 13 years. At the time, they said they wanted to focus on the Cherry Tree as well as pursuing new business interests.

• Mr Redfern held the first of a series of monthly dog walks from the pub on Sunday. More than 180 people and 90 dogs took part, walking set routes of either two or four miles. The next one will take place on May 13 and walkers should meet at 10am for bacon butties and hot drinks.