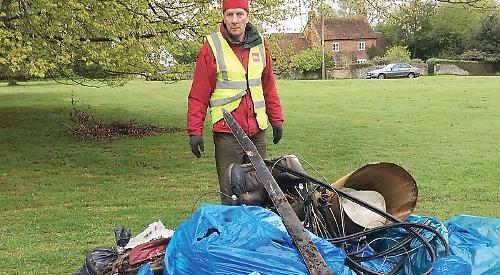 EIGHTEEN noble volunteers carried out a litter-pick on the roads around Stoke Row.

The group met on the village green where they sang Happy Birthday to Judy Fox ( what a way to spend a birthday!)

Within a couple of hours a considerable pile of rubbish and plastic bags full of litter had been collected.

The group found some interesting rubbish in the hedges, including a child’s car seat and a kitchen sink.

Organiser Tony Barry said: “Unfortunately some of the utility companies are less careful about collecting their rubbish than they should be and our pile included a number of redundant gas pipes and discarded telephone cabling brought down by the snowfall earlier in the year.

“The challenge now is to ensure that the roadside verges remain litter-free and to persuade people that dropping litter is wrong.

“The sooner the Government introduces the deposit scheme on plastic bottles and metal cans the better.

“One problem is to find someone to clear the litter from all those lanes which run between the villages, some of which present a real eyesore.”

“Next year the litter-pick will take place earlier, before the grass and the nettles have a chance to grow and cover up some of the litter mindlessly thrown out of cars on to the verges.”