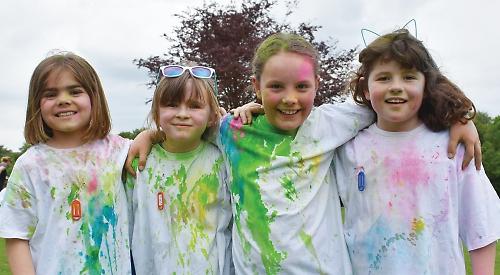 The Friends of Stoke Row School organised the fund-raising event at the village recreation ground, off Newlands Lane, on Saturday.

About 130 people completed laps of the field where they were covered in non-toxic powder paint as they ran around.

The more laps runners completed, the more colourful they became. Runners were also sprayed with water on their T-shirts to help the paint stick.

After each 600m lap the runners were marked on a tag to keep track of how many they had completed. Everyone who took part received a medal.

Rocco Shaw, Cale Dosanjh and Sully Akers ran the furthest, each completing 18 laps of the course, meaning they ran 10.2km.

Before the runners set off there was a warm-up led by Christopher Lee, who coaches running to the school’s pupils.

The event raised £400, which will be put towards new resources for the school.

Lou Chater, chairwoman of the Friends of Stoke Row School, said people were already asking if it was going to be repeated next year.

She thanked Louisa Dosanjh and Laura Shaw for leading the team who organised the event.

Mrs Chater said: “It was fantastic, we’ve had really positive feedback and it wasn’t just children from Stoke Row.

“Children came from Checkendon Primary school and the local village. The weather was really kind to us and there was no rain until we finished running. We had runners as young as one right through to parent age. We are delighted with how successful it has been.”

She added: “It was a really good social event for parents and families and they have already been asking about next year. Everyone was saying how fun it was. It was a really happy occasion.”