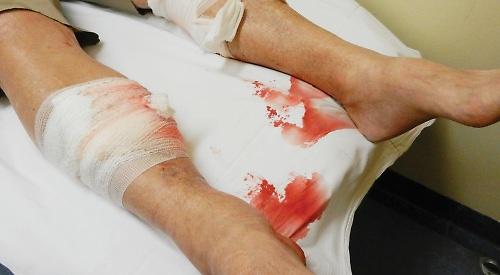 A MAN who was attacked by two dogs at Stoke Row Steam Rally says the animals should be put down.

Peter Entwisle, of Nicholas Road, Henley, suffered four deep wounds in his legs after being bitten by two Jack Russells belonging to a fairground ride operator.

The 78-year-old spent five days in hospital having treatment following the incident on Saturday, June 9.

He was one of 10,000 visitors to the two-day annual rally, which takes place in Whitchurch Hill.

Mr Entwisle was walking around the showground at about noon when he was set upon by the dogs, which were tied to the ride.

He said the attack lasted two or three minutes before the dogs’ owner realised what was happening and stopped them.

His trousers were ripped by the dogs’ bites and covered in blood from his wounds.

Mr Entwisle said: “I walked past them without realising they were there. When they came at me, it was like I was breakfast and they were picking at me. The dogs were encouraging each other and beat me up. If I was a toddler I would be dead.”

He said he kicked the dogs to get them off him, adding: “I thought my foot was going to end up being taken off. As soon as I had kicked one off the other would come in. I just could not get them off to get away. When I looked down I could see my trousers were ripped and covered in blood. The blood had leaked down into my shoes.

“The shock of what happens makes you very, very confused.

“The owner had heard the kerfuffle, all the barking and screaming from the dogs. He eventually got them under control, sat me on a bench and asked if I was all right.”

Mr Entwisle added: “They should be put down. It’s like when dogs chase sheep, they just get an urge for blood. If the dogs had been muzzled then there would not have been a problem.”

After the attack he went to the first aid tent, where his wounds were bandaged.

One of the first aiders called an ambulance but was told there would be a wait of more than two hours, so one of the event organisers, drove him to the Royal Berkshire Hospital in Reading, where he was admitted that evening. He underwent surgery twice in two days in order to clean the wounds before being discharged.

Mr Entwisle said: “My heart was playing up and I had to be given chest compressions during the first surgery.

“Because of that they did not let me out of hospital. They kept me in to make sure I was stable.

“Now I’m back on medication for a slight heart problem and the doctors have told me to be careful.”

Mr Entwisle spoke to the police on the day after the attack, when the rally was still taking place, and hoped they would go that day to track down the dogs’ owner but the officers only spoke to an organiser.

He said: “All they seemed to do was ascertain the situation. They spoke to someone on the Sunday but didn’t find out who owned the dogs.

“I don’t really understand what the police were playing at.”

Mr Entwisle was asked by the police if he would be able to pick out the dogs’ owner in a line-up but said he would struggle due to the shock he suffered immediately after the attack.

He said: “It’s like when you have a car crash, it all gets confused. Your brain does not acknowledge what was going on.”

Mr Entwisle, a retired book-keeper, thanked all the people who helped him at the rally and hospital staff for looking after him.

The rally organiser did not respond to requests for comment

A Thames Valley Police spokesman said they were investigating but no one had been arrested.

The police are appealing for anyone with information to call them on 101 and quote reference number 43180175130.