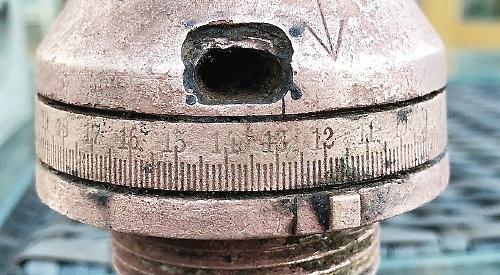 TWO boys unearthed a detonator cap from a First World War bomb while digging in a patch of mud.

Ben Proctor-Pearson and Lorenzo Nicoletti-Dowd thought they had found a hand grenade when they pulled the mud-covered device out of the ground in woodland behind the playground in Stoke Row.

The pair, who are both eight and live in the village, took it to their parents, who did not want to take it home in case it was an explosive.

Instead, they took a photograph then returned the device to where the boys had found it and hid it beneath a pile of leaves.

They reported their find to the police but officers were not concerned so the next day Ben’s father Alex retrieved the cap and cleaned it using a vinegar and salt solution.

He scraped off the thick layer of mud, leaves and corrosion to reveal a Dopp Z 92 brass cap, also known as a fuze, which would have been attached to a German shell fired by 15cm artillery guns.

The device, which is about 10cm long, 6cm wide and about 1kg in weight, was invented at the turn of the century and has a clockwork mechanism with timer markings on the collar, which rotates.

It can be set to detonate an explosive round between one and 28 seconds after firing and is also designed to go off on impact with the ground. It would originally have been attached to a smaller 1kg charge which, once detonated, would have set off the contents of the entire shell.

It is not clear how it came to be buried in Stoke Row as the German bombing raids were largely confined to London and the east coast.

Mr Proctor-Pearson is looking after the cap but the boys hope to take it to show their classmates at Moulsford Preparatory School as part of the school’s celebrations of the centenary of the Armistice.

The boys, who became friends last summer, met at the playground by chance on Tuesday last week when Ben, his father and six-year-old sister Harriet visited at the same time as Lorenzo and his mother Claudia.

The adults chatted while the children ran off into the woods and began digging in the mud with a stick.

Ben said: “We suddenly saw this pointy bit poking out of the ground, which was the very top of the detonator, and we had no idea what it was.

“At first I thought it looked like a brick but then we thought it could be a grenade.

“We were actually very lucky that we decided to dig in that exact spot. We have tried looking there again to see if there’s anything else but we didn’t find anything.

“I’m looking forward to telling other people at school.”

Lorenzo said: “I’ve always enjoyed digging on the beach to look for crystals and things like that but this is the most exciting thing I’ve found because we thought it could be live.

“It’s cool because it’s from the First World War and we’re learning about that in school.”

Mr Proctor-Pearson said: “They came running out of the woods shouting ‘look what we’ve found’. Perhaps I got caught up in the boys’ enthusiasm and active imaginations but I did worry that it might be some kind of bomb and thought we should tell the police.

“I sent an email to the Henley neighbourhood team and they said they would look to recover it at a later date so I thought I should bring it back as they obviously weren’t too bothered.

“Once I’d cleaned it up and could see the manufacturer’s name and model number, I was able to do a bit of research and find out more about where it came from. I could also confirm that it was the bit that sat on the top and not the bit that exploded.”

He said: “Steve had two theories about how it got there. It could have been from a raid as the German Gotha bombers used artillery shells but that’s unlikely as they targeted the east coast and there’s not much to bomb in Stoke Row!

“It’s more likely that it was brought back by a veteran and buried for some reason. You’ll often see them going on eBay and I gather it’s quite common for farmers on what used to be the Western Front to dig them up.

“They’re not really rare in themselves, it’s more the fact that it’s turned up in our village that’s unusual.

“The boys are very excited and I don’t think they understood the significance of their find at first so I was showing them pictures of other ones and how they worked.

“We haven’t really thought about what to do with it in the long term — as long as it’s not dangerous I’m sure they can share it between them.

“They’re definitely very keen to take it into school, especially with the centenary celebrations going on.”

Mrs Nicoletti-Dowd, whose husband Ryan runs the Wigg hair salon in Reading Road, Henley, said: “Lorenzo is always digging for treasure and this is the first time he’s actually found something.

“We’re always joking about the things he might find but when he and Ben brought the detonator to us we thought, ‘well, hang on a minute, this looks like something to do with bombs’.

“Lorenzo’s grandfather was in the army so very quickly confirmed it wasn’t a grenade.

“We’re really intrigued as to how it got here. We’d love it if someone could give us an explanation.

“Lorenzo was so excited to have found something after years of digging and now wants a metal detector for Christmas!”