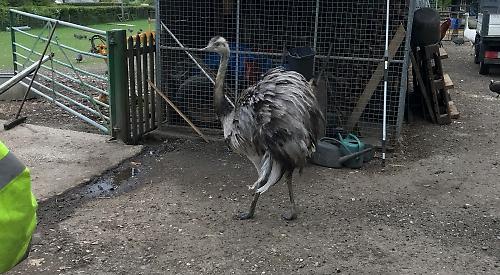 THE owner of a rhea with a history of escaping is delighted to have the bird back after he was recaptured during yet another attempt to flee.

The 4ft tall bird nicknamed Chris was grabbed by a farmer on Henley golf course with the help of a dog walker.

Now he has been returned to owner Tony Herring in Neal’s Lane, Stoke Row.

The bird, which is native to South America, had been secured in the field off the B481 in Peppard after escaping in December and evading capture for weeks despite numerous sightings.

Mr Herring, 69, used fencing to ensure he could not get out of the field and gave him food and water every day.

He had planned to coax Chris into a horsebox to take him home but had still not executed the plan when the RSPCA contacted him earlier this month and threatened to rehome the bird unless he took action.

Mr Herring told them he worried about his plan backfiring and the bird escaping again.

Despite this, he heeded the warning and attempted to capture Chris on a Sunday morning only for the bird to flee, just as he had feared. It was only thanks to farmer Samuel Austin that he was recaptured on Henley golf course.

Mr Austin, 39, of Kings Farm Lane, Harpsden Bottom, was tipped off by dog walker Sophie Lee who saw the rhea in Harpsden.

“I was not so surprised,” he said. “It is the kind of ridiculous thing I have to do the whole time as I tend to be the person that is called when there are loose animals around.”

Before leaving home, he read up on rheas on the internet to work out how best to capture it.

Mr Austin said: “They have 6in claws and can disembowel someone.

“My wife was trying to discourage me but knew she was not going to make much headway. She told me to be extremely careful.”

He drove through Harpsden to make sure the bird was not on a road and then met a pair of golfers in the golf course car park who told him they had also seen it on the course.

He and Mrs Lee then went looking for Chris and found him near one of the greens.

Mrs Lee called Mr Herring, whom she knows, to tell them the bird had been found but he was reluctant to come out.

Mr Austin said: “The owners said they were not going to come unless we had it enclosed somewhere. They had tried to capture it so many times and failed.

“I was not particularly happy with them. I can understand why they weren’t prepared to come out but I did not have to do it. I was just taking responsibility for someone else’s problem.”

Mr Austin said he circled the bird slowly and tried to steer it using tricks he had picked up while working as a horse behaviourist.

He recalled: “I walked it around and got to know it. I was walking quite close to it and not trying to approach it but trying to steer it with my back leg, which it was conducive to.”

Mr Austin realised he would need a horse trailer so while Ms Lee kept an eye on the bird he went to fetch his Land Rover Defender and trailer and seek permission to drive across the course. He brought back mesh wrapped around pen panels to create a funnel shape for the bird to be coaxed along to the trailer, which he did with the help of his wife Louise and Mrs Lee.

Mr Austin said: “It did keep trying to go in the wrong direction. We had a couple of people from the golf course helping and I told them pretty much to stay back because I didn’t want anybody to get injured.

“We managed to herd him into the funnel, which was about 12ft to 15ft across. Then I realised the bird was going to be trapped, so we went very, very gently but he suddenly panicked and turned around and tried to run past me.

“I managed to block him in one direction so he tried to run past the other way but I managed to capture him with my shepherd’s crook. It was possibly one of the scariest moments of my life.

“He tripped himself up and stumbled on to the floor. I thought ‘if I let go of him we are never going to catch him’ as I did not think we would have another opportunity.

“I came up behind him and put my arms around his wings and joined my arms together around his chest. I took a step backwards so he was lifted off the ground and couldn’t get any purchase. He became quite compliant once his feet were off the ground. He was so surprised at being picked up.”

Mr Austin then put the bird in the back of the trailer and told the others to close the doors immediately. He said it was a “massive relief” once Chris was secure and they called Mr Herring again before he drove the bird home.

He said: “It was good fun to be honest — quite an adventure. You don’t often get something like that on a Sunday afternoon.”

Mr Herring said Chris had not tried to escape again since returnning but one of his other male rheas was not happy.

He said: “He is a bit cocksure of himself and was strutting around and seemed to turn his nose up [at Chris].”

After escaping in December, Chris was on the run for weeks and held up traffic when he ran along Peppard Road, Sonning Common, on a Sunday morning in January.

He managed to evade two police officers in Butler’s Yard before fleeing across country to Peppard Common. Two days later he was spotted in the field near Peppard Primary School, where his owner fenced him in.

Mr Herring said: “He is not daft and he likes to wander around. What can you do?”