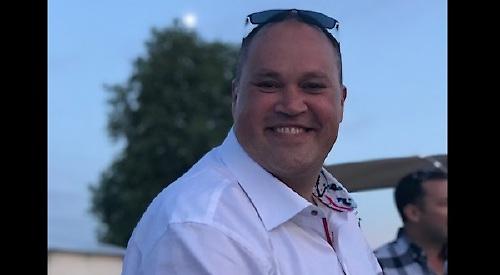 A MAN who died after falling from his electric skateboard was a “fun husband and a magical loving father”.

Brad Visser’s widow paid tribute to her husband after his inquest where a verdict of death by misadventure was recorded.

Annie Visser also urged other people not to ride electric skateboards, scooters or hoverboards on the roads as it is illegal.

Mr Visser, 38, suffered a severe brain injury when he came off his skateboard near the family’s home in Main Street, Stoke Row, at about 7.30pm on July 17 last year.

He died at the John Radcliffe Hospital in Oxford 10 days later.

The South African father-of-two, who ran his own bespoke furniture business in the village, had not been wearing a helmet.

In a statement released by Thames Valley Police after the hearing, Mrs Visser said: “Although Brad was adventurous and loved his toys, had he known that being on a public highway on his electric skateboard was actually a road traffic offence, he would never have been on the road that evening.

“In our grief, we hope that in future, other electric skateboarders, scooter and hoverboard users will now be more aware of the laws and the risks, so that no other family has to endure the sadness of losing a loved one in this way.

“Brad was a superb, fun husband and a magical, loving father to both Ozzie and Chloe. He had a huge heart and was always ready with a smile to help anyone in need.

“If anything positive can come from this tragic loss, spreading awareness of road safety, we would feel that his death would not be such an absolute waste of a brilliant life.”

The inquest at Oxford Coroner’s Court on Thursday last week heard how on the day of the accident Mr Visser had been at his workshop making alterations to his skateboard, which had electric motors controlled by a Bluetooth handset.

He had only owned it for a couple of weeks and had fitted it with different tyres to make it more suitable for road use. He had also been drinking, although it was unclear how much alcohol he had consumed.

“I left just before 6pm and he was still working. He lived next to the workshop, which meant it was not unusual for him to work late.

“The following morning, I went to the workshop and saw six or seven empty cans in the waste bin.”

He said a man called Tony had had one can, adding: “I don’t know if anyone visited. I can only assume Brad had drunk the rest.”

There were no witnesses to Mr Visser’s fall but CCTV cameras filmed him beforehand travelling on the skateboard at around 20mph.

Sarah Joyce, who was walking in Main Street, said: “My attention was drawn to the middle of the road when I saw a man riding on a skateboard. I was surprised by the speed he was going at.

“I didn’t think too much more about it and I walked for a few more minutes. I had not yet reached the pub [the Cherry Tree] when I heard a scuffing or dragging noise.

“I saw the man on the skateboard lying on the far side of the road. I went over to see if he was okay. When I reached him I called out but he didn’t respond.

“He was breathing but heavily. I saw that he had a serious-looking injury with blood coming from his ear. He carried on breathing but didn’t say anything. Another lady who stopped said she was a medical professional so she took over. It was five or 10 minutes later that the ambulance responder arrived.”

The inquest heard how Mr Visser initially responded well to treatment in hospital but his family decided to stop it after being told it was unlikely he would return to his full physical and intellectual capacity.

Peter Clark, assistant deputy coroner for Oxfordshire, told Mrs Visser: “This must have been an absolutely dreadful shock.

“It is clear he enjoyed his skateboard and this was a dreadful accident that will obviously have a deep impact but I’m sure you will also have very good memories of Brad and his time with you.”

It is illegal to use electronic skateboards on a public highway, including the pavement and only permitted on private land with the landowner’s permission.

Pc Mark Dunne said: “These skateboards are capable of speeds in excess of 20mph and safety equipment should always be worn.

“As a result of this tragedy, the assistant deputy coroner has said he will be writing to the Government department responsible, highlighting the risks and lack of public understanding on the use of similar devices.

“Our thoughts remain with Bradley’s family and we hope that the conclusion of this inquest will bring about some closure for them from this tragic accident.”