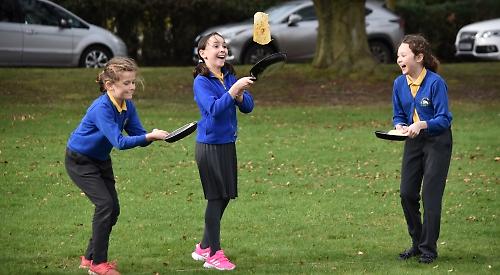 She won the teachers’ event, just as she did in 2018, finishing a clear distance ahead of the field.

She was unable to take part last year as she was on maternity leave.

Mrs Whittle, who has been at the school for eight years, said: “There were five of us in my race and this was not my first win.

“It is nice for the children to see their teachers getting involved and having fun.”

Around 80 pupils from reception class to year six took part in 15 races on the village green on Shrove Tuesday.

Some year groups had different events for boys and girls, while other races were mixed. The children had to flip their pancakes at the start line and again just after the halfway mark and were disqualified if they didn’t carry the pancake all the way to the finish. They were cheered on by parents and grandparents, who also took part in their own races.

Olivia Graham watched her daughter Lola come third in the reception year race and then won the parent and toddler race running with her pet goldendoodle Clover. She said: “I was asked if I wanted to run in the parent and toddler event but I didn’t have a toddler and they said I could run with Clover. It could be the inspiration for a new event next year.”

After the action, the children ate pancakes with their favourite toppings.

Seb Bacon, who won the year two boys’ event, said: “I didn’t expect to do that well. It is one of my favourite things about Pancake Day and I will have more when I get home.”

The event was organised by the school’s parents’ association and Stoke Row Independent Chapel.

Mrs Whittle said: “We have been having the pancake race forever and I really enjoy it. It brings the whole school together.

“Engaging with everyone in the community to be part of our school and giving the children opportunities to shine in different ways is what makes Stoke Row special.”