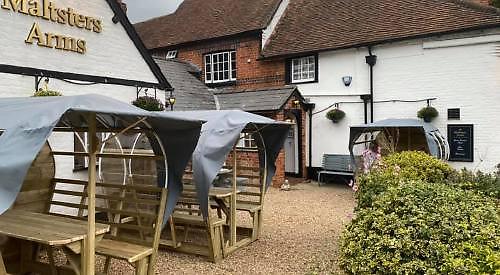 PUBS are coming up with new ways to welcome customers safely and boost their trade as winter approaches.

The latest coronavirus guidelines have created further problems for the hospitality sector, with groups of no more than six people allowed to meet.

All pubs must close by 10pm and are restricted to table service only, which is in addition to the raft of measures landlords have had to take just to open their doors.

Many have had to reduce the number of tables to enable 2m social distancing and ask customers to wear face masks whenever they are away from their table.

Dan Redfern, who runs the Cherry Tree Inn in Stoke Row, has set up a marquee on the pub’s front garden. This has room for up to 50 people, so will help the pub to meet demand as it has had to remove about a third of its tables indoors.

Mr Redfern said: “We are trying to survive. We’ve had a really good re-opening period but we have only 40 covers inside.

“We have bought the marquee because we see it is a long-term investment and because the Government says these new rules could be around for at least six months.

“The marquee will enable us to serve people safely. It is fully heated and Wild & Rust in Henley has done the interior design. It looks a bit like the pub inside and is nice and cosy. We want to be able to continue to serve the amount of people that come to the pub otherwise we would have to turn lots of our customers away.

“We have managed to retain our numbers, which is so important to the survival of the business.”

The Brakspear pub, which currently employs 27 staff, was closed for more than three months due to the lockdown.

Since it re-opened in July. a series of coronavirus measures has been implemented to protect staff and customers, including a one-way system, sanitiser stations, personal protective equipment for staff and face masks for anyone who forgets to bring one. Information about the NHS covid-19 app is on every table.

Mr Redfern, who has run the pub since March 2018, said it benefited hugely from the Government’s Eat Out to Help Out Scheme in August.

He said: “We were open from Monday to Wednesday and it was absolutely brilliant. We had such a good response and at times it was almost too busy.” Mr Redfern is considering a tailored version for the Cherry Tree in order to maintain a steady flow of customers as the nights draw in.

He said: “At the moment trade is still good as the weather has been nice but looking at November we are certainly thinking about offering our own version. We’ve done really well but want to keep that momentum going.

“Some pubs are struggling and those that can utilise an outdoor space are in a better position to weather whatever comes our way. We just don’t know what is coming next.”

At the Maltsters Arms pub in Rotherfield Greys, landlords Gary and Donna Clarke have spent £3,000 on three outdoor pods, which can each seat up to six people.

The pods, which were made by Lambert Home Builds, of Oxford, consist of wooden benches, a waterproof covering, LED lighting and microwave heaters.

Mr Clarke said: “The idea has really taken off. People have gone crazy about them and have been ringing up to book them.

“We are trying to get an après ski atmosphere going with mulled wine and hot drinks. People love it because you can feel cosy with your family and we have fleeces for people to wrap up in as if they were away on holiday skiing.

Mr Clarke, who used to work as a chef in France, added: “This is our first year in the pub and we always thought it was going to be an investment year. We’re basically going for broke now and we don’t have much choice but to push on and we’re pushing harder now.”

As well as the pods, the pub has a parasol on the terrace and planters in front of the building to reduce concerns about the pods being close to the road.

The pub, which has six staff, has a one-way system and table-only service with contactless payment.

Mr Clarke said: “We took out four of five tables when we re-opened in July. Because customers can’t use the bar anymore, we can put more tables in that area to provide space for a group of six in front of the fire.

“We are using a new booking system to reduce the hourly rate of customers and we are taking in no more than 30 inside at any one time. Due to table service, people have to wait a little bit longer to get served.

“The 10pm curfew doesn’t really affect us because we are food-led and we don’t have a late-night drinking crowd.

“I can’t see coronavirus affecting Christmas trade too much as long as we stick to six people per table. People from offices are still going to want to come out and we’ve already suggested to some people to have smaller groups on separate nights to minimise the exposure.”