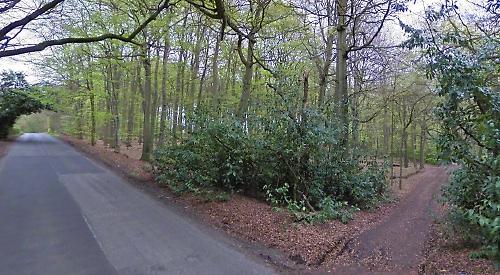 PROTECTED woodland is being sold with “potential” for housing development despite buyers having no chance of obtaining planning permission.

A nine-acre parcel of land off the main road between Stoke Row and Peppard Common has been split into 17 plots of about 0.15 acres.

These were advertised for up to £25,000 each and all but two have been bought in the past six months.

The ancient woodland cannot be developed as it is the subject of a tree protection order.

In somes cases, the new owners have fenced off their land. This isn’t against the law but opponents say it spoils views of the ancient woodland in the Chilterns Area of Outstanding Natural Beauty.

In the summer, a protected tree was chopped down, prompting South Oxfordshire District Council to put up notices warning owners that felling the trees is illegal. Officials are trying to trace the culprit. Meanwhile, Stoke Row Parish Council is urging Oxfordshire County Council, the highways authority, to officially recognise a number of informal footpaths that cross the land so they can’t be blocked off.

It gathered testimony from villagers who say they have used the pathways for decades.

The council is calling on Henley MP John Howell to put pressure on the Government to tighten the rules on advertising such plots for sale.

It learned of the problem in the spring, when “For sale” signs appeared at the verges of the woodland between the junction with Neals Lane and an unnamed track about half a mile to the north. The plots are being advertised by estate agent Barnard Marcus and Exclusive Estates & Auctioneers, of Battersea. Both have published listings which include artists’ impressions of large, modern houses on the land.

Barnard Marcus says each plot has “road frontage and potential”, adding: “Currently each is mainly woodland with a variety of species but clearly offers a number of opportunities for a purchaser to consider alternative uses or even development of each plot, subject to the necessary consents.

“Buyers must rely on their own enquiries with regard to any development potential but are invited to use the computer generated images as an idea to take forward for planning advice with the local authority.”

Exclusive claims the land has a swimming pool and would be an “ideal weekend retreat” to “preserve the countryside for future generations”.

One listing has a testimony purportedly from the buyer of a neighbouring plot, saying they were “very, very happy to own a little piece of heaven”.

The advert says: “While currently lightly populated woodland, the parcels offer an excellent opportunity for families to own and enjoy private land for themselves… and a number of other potential uses.

“There are existing dwellings across the road so there could be easily accessible services and media, subject to all necessary consents.

“The images shown here are only provided for illustration and imagination. They have not been submitted to the council but are indicative as to what might fit on the land.”

Exclusive is also selling “overage” rights for at least one plot, under which the new owner must pay 25 per cent of the increase in land value if they secure planning permission within the next 80 years.

Parish councillor Roger Clayson, who has reported the firms to Oxfordshire County Council’s trading standards department, said: “It’s a very emotive issue. When the sale signs appeared, some ended up in bins because people were so upset.

“I was very worried, especially once the boundary fences appeared.”

He and his colleagues alerted Jo Robb, the village’s district councillor, after the felled tree damaged a fence on neighbouring farmland.

Other trees had been marked for the chop so she arranged for officers to attach signs to each one warning of the legal consequences.

Councillor Clayson said: “She stepped in very quickly when the felling operation started and the district council is now trying to find the owner of the plot although, frustratingly, this has been delayed because the Land Registry hasn’t been updated.

“The tree protection order was put in place some years ago, presumably because the council anticipated something like this.

“That woodland has been there since at least 1600 and the only thing landowners can legally do is erect a low fence.

“Our clerk has also written to the auctioneers to explain that their listings could prompt a misinterpretation, given that the likelihood of getting planning permission is extremely remote.

“If this continues, none of these landowners is going to take proper care of the woodland because that wasn’t their reason for buying. They will be difficult to trace and talk to — I understand one was purchased by a South African company, for example.

“I had discussions with one chap who was fencing off his plot, as did several concerned villagers, and he must have realised what he’d got himself into because it’s being advertised for sale again.

“Another young man came up from Maidstone and was talking about building a log cabin to retreat to at the weekend. He was also advised that the woods are protected and that put him off.

“Many people just don’t realise how hard it would be to get planning permission — they just think about how nice the area looks. It’s mostly folks from urban areas who like the idea of a country ‘escape’.”

Cllr Clayson said there had been a similar issue with woodland near Witheridge Hill some years ago, adding: “This is a widespread problem in the Chilterns and will continue for as long as people can advertise land in this way.”

Cllr Robb said: “The fragmentation of ancient woodland and sale of small plots is a national issue. In some cases, people buy them while completely unaware of the obstacles they’re going to face.

“The advertising often shows these James Bond-style houses, which are totally inappropriate and a breach of trading standards because you’re never going to get planning permission for housing in a location like that.

“The district council’s stance is to apply protection orders and enforce them where unlawful activity is reported.

“In this instance, it has been pretty successful in managing the situation and I credit our tree officers with being incredibly responsive.”

Stoke Row parish clerk Ina Chantry said: “Cllr Robb’s actions haven’t stopped the widespread marketing of the land with dubious information but they restrict the purchasers in terms of what they can do.

“Effectively the land must be maintained as woodland with limited interference from the owner and the trees shouldn’t be cut down.

“Some new owners have fenced in their plots, which they are permitted to do, but it damages the feel and sense of history that these woodlands have held for hundreds of years.

“In a recent conversation with one new owner, it became clear that they were still not being given details of the tree protection orders and believe they can use the land for planting a garden, camping and even housing.”

Mr Howell said he had discussed the issue with people at a high level in the Government and was awaiting further advice.

This could involve changing the law, although it would take time to work out the best approach.

He said: “The planning consent which these adverts allude to will simply never appear, so it’s verging on fraudulent and a disgraceful activity.

“It’s nothing new — it’s been going on for years but I certainly don’t approve and am doing everything necessary to stop it.

“It is difficult to resolve because these advertisements are clever enough to avoid outright stating ‘you can have this plot and build whatever you like on it’.

“But in reality, it’s one thing to show an indicative artist’s impression of a house and quite another to get permission, which just isn’t going to happen.

“The district council has assured me that it has the powers to just say ‘no’ to any such proposal but it’s still frightening that sellers are marketing land in this way.”

A spokesman for the Chilterns Conservation Board said: “You can’t stop woodland being sold because there’s nothing wrong with it but this style of selling is a concern.

“Buyers aren’t always aware of the requirement to maintain the health and biodiversity of their plot and where possible we work with them to give advice.

“These people are sadly paying well over the market value for what they can practically achieve and the land can end up abandoned, which benefits nobody.”

Both Barnard Marcus and Exclusive were asked for comment.