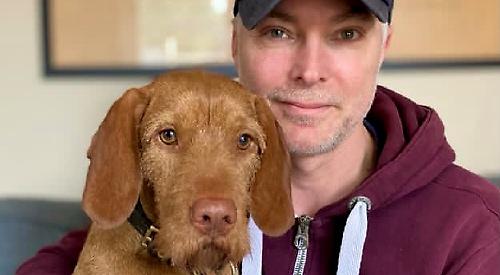 A DOG walking scheme designed to get men talking about their mental health has restarted in Henley.

Dudes and Dogs was launched in September with walks taking taking place on Maidensgrove Common every Sunday morning.

However, these have not been allowed during lockdown so the service moved online to provide talking therapy.

Now, with the coronavirus restrictions being eased, the group is up and running again with up to six people allowed each week.

The sessions are free and discreet. The leaders are trained in mental health first aid and will refer people to support services if it is required.

Nick Poulton, who leads the group, believes the intitiative has an even bigger role to play due to the impact of the pandemic.

He said: “When I first started I was quite sceptical but the combination of exercising and being with dogs just puts you at ease.

“By walking side by side — and not sitting opposite — also makes a big difference because it is much less confrontational. It combines to create a powerful safe space.

“The walks are an hour long and we tend to do a loop around the common. Sometimes we also head through the woods down towards Stonor.

“The guys that come on walks really get something from it. They feel a sense of positivity and the benefit of exercise.

“The walks have become a staple in their lives — it can change their entire day or week because they can get something off their chest, or they can be there for one of the other guys.

“The crisis of men’s mental health was growing anyway but the pandemic has thrown a big grenade on that.

“We don’t put any pressure on guys to come and talk — they are welcome to just listen and when they’re ready to talk they can.”

Mr Poulton, 45, lives in Stoke Row with his wife Laura, 44, a teaching assistant at the village primary school, and their 10-year-old son Casper. They came to the area from London in 2010.

Mr Poulton, who is originally from Gloucestershire, recently started his own leadership coaching business. He previously worked in television for Sky, Bloomberg and the BBC and found the stress of work made him anxious.

He explained: “I found myself internalising a lot of that stress and it would come out as anxiety. I didn’t have an outlet and I didn’t want to burden my wife.”

These feelings have eased since he started walking with Otto, his 22-month-old wirehaired vizsla.

Mr Poulton said: “After a long period of working in very intense jobs with long commutes, it got me outside and back to fitness.

“It is an aid to stress relief and there is something quite magical about being with a dog.”

Dudes and Dogs was started in Bristol as a community interest company in 2019 and Mr Poulton read about it early last year.

He said: “I was already walking with Otto when I saw something about it and it resonated with me. I registered my interest and the founder was looking to spread it across the country.

“With the pandemic it has been tough for us to maintain the momentum we wanted but we’ve stuck with it.

“An online community was started when the walks couldn’t happen and that grew very quickly into a safe space where people could open up. In the last lockdown, we didn’t want to have to stop walking again, so we started doing them virtually. A walk host would set up a group and guys could join via their phones. We had people from different parts of the country talking while they were with their dogs.”

Attendance varies but Mr Poulton says the size of the group could get bigger once the restrictions are fully lifted, although he also feels it is important for it not to get too big so that men do not feel daunted when they join.

He said: “With men’s mental health, it can feel like a big first step for them to come and talk about their problems. If the demand grows, I would hope to increase the number of walks we offer. If I’d had the opportunity to do something like Dudes and Dogs earlier, I would have definitely taken it. I’m a bit of an introvert and this actually pushed me out of my comfort zone but I love doing it.

“Otto gets me exercising and his level of energy is just infectious. Dogs are mood-lifters and they are always happy to see you. That just naturally has this magical impact on you.

“Generally, women are much better at opening up. There is a stigma that puts an extra barrier in your way if you are a man. When you look at the stats, three quarters of suicides are men. It is the biggest killer of men under 45, which is sobering.

“We want to talk to men before those problems develop into something more serious.”

Mr Poulton is also a fantasy author. His first book, Podwitch, was released in 2014 as part of a trilogy and the sequel, Hiraeth, is due to be released in June.

He said: “I’m no J K Rowling but as a life achievement it is something I am very proud of.”

Dudes and Dogs is a not-for-profit organisation and relies entirely on donations and fundraising. For more information, visit dudesndogs.co.uk