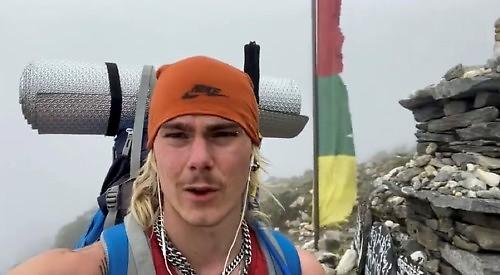 A MAN from Stoke Row who has travelled around the world over the last five years is preparing for a walk of more than 4,000km.

François Pearce fell in love with exploring as a teenager and has since been to Africa, Asia and South America to hike and do volunteer work.

The 21-year-old completed a solo hike to Everest base camp last month.

Now he is planning to take a year off from his studies at university to live and work in Mexico for seven months and then trek all the way to Canada on the Pacific Crest Trail.

The walk to the border with America in British Columbia will take him months but he should complete it just in time to return for his third and final year of studying philosophy at Exeter University.

Mr Pearce said: “If I can do this, it will be the biggest thing I have ever achieved.

“It is the dream goal and I count myself very lucky that I am able to do something like this and that Exeter are so flexible.

“I will be working with a travel and lifestyle business and I will save up the money, which should allow me to live in Mexico City and fund the walk to Canada. I’m going to do it alone but I’ve done a lot of my travelling alone.

“The only reason why a lot of my travelling works is because of the people I meet along the way and the kindness they show me.”

Reaching Everest base camp was his biggest test so far and it took Mr Pearce 10 days to climb the 5,364m in the monsoon season.

Many of the refuge points for travellers were closed due to the covid restrictions, which meant he had to sleep in a tent most nights.

He filmed himself at different stages of the challenge and made a video to share on his Instagram page.

Mr Pearce said: “It was an incredible experience. I was alone at base camp and I really don’t think many people have had that experience because it would normally be busy.

“It was also scary and I got really scared on the final day when I was surrounded by clouds and there were glacier falls either side of me so I could hardly see where I was going. I was also very ill. I had been warned about the altitude changing and had to do the final ascent in one day instead of two.

“I did a self-timed photograph of myself and then I just got out of there.”

Born in Windsor, Mr Pearce moved to France with his family when he was a baby and stayed there until he was eight.

His mother, Marlene Hervey, is originally from France and he has two younger siblings, Fleur, 19, and Sinclair, 17.

Mr Pearce said it was his mother who had sparked his interest after taking him walking in the Alps when he was 13.

He said: “In the early days, I would say I hated every moment of it. I think I just found the physical side of it tough. I did sport at school but I didn’t enjoy going up hills. As I grew up, I came to enjoy it more because I realised I got to see all these amazing places and I got better with the walking side.”

After studying at Gillotts School in Henley and then at Stowe School in Buckinghamshire for his A-levels, he started planning the first of many trips overseas.

He worked shifts at the Regal Picturehouse Cinema in Henley and for a digital signage firm in Binfield Heath to help fund his travels.

His first trip was to South America, where he spent three months hiking with Josh Armstrong, an old school friend.

Mr Pearce said: “I knew that I wanted to go my own way after leaving school. I always liked the idea of hiking and there were a few preconceptions about South America being a dangerous place, so I was keen to overcome that.

“At one point I was going through a forest and there was an abandoned temple and hundreds of men holding guns but they were actually there to defend tourists rather than hurt us.”

He next went to south-east Asia, visiting Thailand and China.

Mr Pearce said: “I wanted to immerse myself in the culture. I hiked Mount Hua and it was absolutely incredible. It is one of the five sacred peaks of China. There was a cable car that took you to the top and that takes about 10 minutes, but I wanted to challenge myself and it took me about three hours to walk it.

“I did a lot of small trips in China and I went through the Longsheng Rice Terraces.

“It was just miles and miles of rice flats going into the side of the mountains.

“I like to go to the places where you have to put in physical effort for the reward. I became more confident and I started hitchhiking. I learned an important lesson that if you live in fear then there is no point in living.”

At the beginning of this year, he went to Tanzania for two months followed by two weeks in Lebanon and two more in Nepal.

“In Central America, I got a nannying job by mistake. I spent my days rocking Costa Rican children to sleep.

“I have always found doing the volunteering extremely humbling. I’m fortunate enough to be in a position where I can help others while visiting some beautiful places.”

When he is older, he would like to become a full-time personal trainer in developing countries.