Villagers turn out in force for first litter pick since 2019 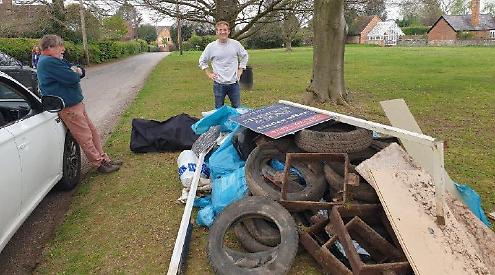 ABOUT 50 people took part in a litter blitz in Stoke Row on Saturday.

They assembled on the village green and moved to the Cherry Tree Inn for instructions and bacon butties and coffee provided by landlord Dan Redfern.

Teams were sent off in all directions towards Nuffield, Highmoor, Wyfold and Checkendon to clear the roads and lanes coming into Stoke Row.

The volunteers were helped by numerous children, members of Stoke Row WI and parish councillors.

Volunteer Tony Barry said: “This was the first time in three years that this event has taken place and some commented that the reduction in traffic has resulted in slightly less ‘pure’ litter — perhaps more people are getting the message about taking their litter home.”

The blitz finished just before a wedding took place in St John’s Church and the volunteers were able to celebrate their efforts with coffee and cake at Stoke Row Stores, provided by the proprietors Nikki and Paul Steiger.