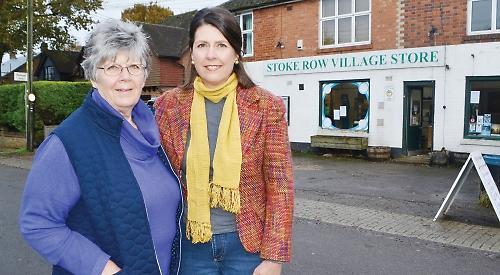 THE village shop in Stoke Row has been taken over.

Nikki Steiger, who already runs furniture outlet Get Furnished in Nuffield with her husband Paul, is to manage the business with her mother Jeanette Creewel.

The women are taking over from Peter and Pat Armstrong, who have owned the shop since 1973, and will continue living in the flat above it.

The shop will be closed from today (Friday) until early January while the interior is redesigned and redecorated.

The women plan to add café-style seating to complement the existing hot food takeaway service and could later offer floristry and catering for events too.

Mrs Steiger, who lives in Stoke Row, and Mrs Creewel, from Gallowstree Common, are friends of the Armstrongs, who invited to them to take over the business on an initial two-year lease. Mrs Steiger, a former administrator for Henley building firm Tamdrew, will also continue to help her husband at Get Furnished.

The family moved to Britain from Zimbabwe in 2002 and set up their first business two years later.

Mrs Creewel, who is president of Stoke Row Women’s Institute, used to run hotels with her late husband John and her daughter helped out as a teenager.

She also ran the tea rooms at Greys Court and Nuffield Place for several years and oversaw the refurbishment of the former in 2013.

Mrs Steiger said: “Mum thought she had retired but when this came up we thought it would be a great opportunity to work together as we’ve done it before.

“We’ve both got experience in this kind of industry and were confident it was something we could do so we felt it would be fun.

“Mum’s an entrepreneur and we’ve always got something going on in the family.

“The shop is in a fantastic location in the centre of Stoke Row and there’s a lot of passing trade.

“Looking forward, I think there’s the chance to include more local suppliers in our provision.

“It’s very popular with walkers and cyclists so it’s a great way to cater for people who are visiting the area as well as local residents who need to buy groceries.

“There’s a huge variety of people in Stoke Row and we want to welcome everybody.

“There are often lots of workmen who want to grab something quickly and run and we will look after them as well.

“I think it’s nice to have a family-run store with familiar faces. People like to be recognised when they go shopping and there’s a growing concern about chains taking over high streets.

“Peter and Pat have done a great job of getting to know people well and we will continue that.

“A business like this has a lot of local character and flavour that the chains can’t provide.

“If you’re prepared to provide what people need and at the right price, they will come. This won’t replace people’s big shops but it offers more convenience.

“We’re really excited for the future and very grateful for the opportunity.

“The news has spread around the village quickly and lots of people have been offering us advice and encouragement.”

Mrs Creewel said: “The store is very much the heart of the village and it has a lot of potential.

“We want to remain at the heart of the community and to do that we’re going to have to add value to the existing offering, which we’re confident we can do.”