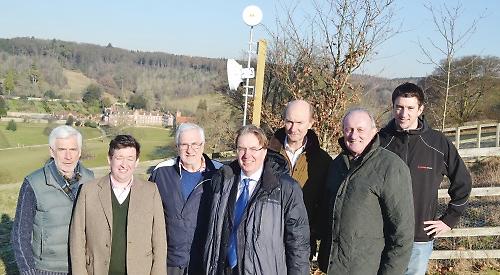 THE heir to Stonor Park has helped to offer up to 50 homes in the village access to high speed wireless broadband.

Residents had been struggling with speeds of less than a megabyte per second but new fibre optic cable installed on the estate has increased this to 24mbs.

The Hon William Stonor already had the technology in a building on the estate, which was previously used as offices, so he invited campaigners to use this and to connect to a hilltop site which broadcasts a signal to the houses.

Connect 8, which led the project, has been working to secure broadband for eight rural villages in the area, including Stonor and neighbouring Pishill.

These are part of the five per cent of homes and businesses that won’t be covered by Better Broadband for Oxfordshire, a multi-million pound partnership between Oxfordshire County Council, BT and the Government’s Broadband Delivery UK. The work at Stonor Park, which was carried out by Village Networks, cost about £10,000.

Peter Richardson, of Connect 8, said the money had come from a “private source” but the group hoped to recoup it through grant funding.

He said: “It’s an important step. Stonor and Pishill were always going to be some of the hardest places to serve so discovering fibre here meant we could immediately benefit Stonor and then hopefully move on to Pishill.

“Connect 8 is most grateful to Mr Stonor and his family for providing the starting point for our wireless broadband infrastructure backbone.”

Mr Stonor said: “I got in touch with Connect 8 and said, ‘a very high-speed fibre cable has already been laid into the park and is there some way you could use this?’

“Very quickly they realised there was a great opportunity here. They got a huge digger, cut a slice in the grass and laid the fibre and electrics across the park to the point on the hill which they chose as the most suitable for broadcasting the wireless to Stonor.

“As anyone who lives in these villages knows, the combination of both a lack of mobile and broadband internet is a great challenge for people for everyday use and for businesses.

“It’s great we have been able to use this very clever wireless technology. Village Networks have been great to work with and they have done it all very quickly.”

Paul Firth, founder of Village Networks, which provides broadband for rural communities beyond the reach of copper and fibre networks, said: “We’re delighted to be able to serve the residents of Stonor and Pishill.

“The network here is brand new, built expressly to serve the area, using the very latest in wireless technology.

“The network will be able to serve the community and its ever-growing broadband demands long into the future.” Henley MP John Howell said: “This is a very good example of people being able to take things into their own hands.

“Broadband is absolutely essential — it’s a utility — and the more we can get it into places the better.”

Tom Dunn, chairman of Pishill with Stonor Parish Council, said: “It’s very exciting and much-needed. It brings us back into the 21st century.”

Councillor Steve Harrod, who represents the area on Oxfordshire County Council, said: “It’s wonderful to have help from Connect 8 and Village Networks to fill in the gaps that we can’t get to so all credit to Peter Richardson and the Connect 8 team for achieving this. It’s a great step forward.”

Connect 8 and Village Networks now plan to extend the coverage to Pishill and have been given permission by Thames Valley Police to use its masts on Britwell Hill to broadcast the signal further afield.

This will allow connections to be made to Cookley Green, Russells Water, Maidensgrove, Britwell Hill and Turville Heath.