Circus comes to Stonor as part of national tour 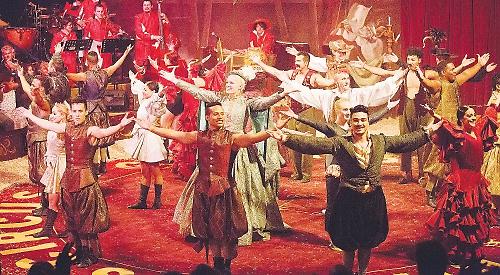 A CIRCUS is coming to Stonor Park in July as part of a tour celebrating the 250th anniversary of the variety show.

Giffords Circus is bringing its latest production, My Beautiful Circus, to the stately home from July 19 to 23.

It will feature some of the classical acts such as death-defying acrobats, domestic animals and fans’ favourite Tweedy the comedy clown.

Visitors will also be able to enjoy a set three-course meal, which changes weekly, at its rustic restaurant, Circus Sauce. The menu is designed using seasonal produce from the surrounding area.

Nell Gifford, founder and producer of Giffords Circus, said: “We are so thrilled to be taking part in the celebration of the 250th year of circus.

“Show director Cal McCrystal and I have been asking ourselves: What makes the circus so magnetic? What is conjured up by the word circus? Why do we want to run away with the circus? What would the most beautiful circus look like? I hope that next year’s show will answer all those questions and more.”

Giffords Circus began in 2000 and since then they have taken a new show out on the roads of England every summer. Their vision was a miniature village green circus, bursting at the seams, packed, rowdy, tiny, a little band of performers who live nomadically, performing daily, engrossed in the serious business of making magic.

Since then it has entertained more than 850,000 people and has worked with some extraordinary circus performers including Attila, a Hungarian horseman from the Great Hungarian Plane, Gabor Vosteen, who played Mozart on five recorders, three in his mouth, one in each nostril, the late Molly Molloy, the choreographer who redefined Burlesque and eccentric dancer Barry Grantham.

Since 2012 the show has been directed by Cal McCrystal, whose credits include Paddington, Paddington 2 and One Man, Two Guvnors.

• Tickets are priced from £10 to £32. For more information and to book, visit www.giffordscircus.com