With this crop sprayer, I thee wed 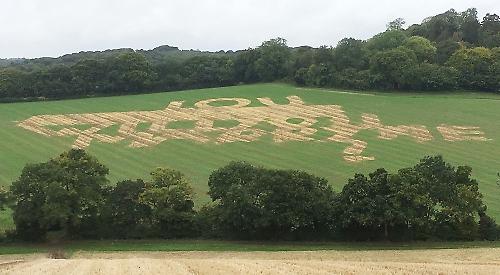 WHEN you propose to your fiancée in enormous letters in a field, the pressure is on to pull out the stops for the wedding day.

But Derek Cheriton didn’t disappoint after tying the knot with Louise Hatton in Henley on Saturday as he drove his new bride to their reception in a four-tonne crop sprayer.

Mr Cheriton, 59, from Christmas Common, runs a spray contractor and had proposed in September by spraying his message in a field in the Stonor Valley.

He decided to use the same vehicle as a makeshift wedding car.

His friend Johnny Cantlay drove his wife-to-be in the vehicle from their home in Greenfield to the registration office in Northfield End.

During the ceremony the Bateman sprayer, which can extend to 36m across, was parked outside and decorated with ribbons and a banner which read: “Just married Derek & Louise”.

As the couple left the building with their guests, there were gasps and then laughter as the party spotted the sprayer.

Family and friends gathered around to take pictures of the newlyweds with the vehicle before the couple climbed into the cab and then headed off to the reception in Stonor.

Mr Cheriton, who had driven himself to the ceremony in an Aston Martin DB7, said: “It was the very machine that I wrote the proposal with.

“I thought it was a little bit different to a car because it’s the main part of my business and it was apt. I’ve always been in farming and Louise embraces my life.

“She knew we were going to use it and was brought down to registry office in the crop sprayer, while I came in the Aston with my best woman, Emma Abbott.”

Mr Cheriton proposed by spraying the words “Lou, will you marry me?” in 24m letters in the field at White Pond Farm.

The farm is run by Simon Stracey, one of his regular customers, who gave him permission to use the field, which had been used to grow winter barley but was left to grow out. Mr Cheriton was due to spray the field before it was cut and told Mr Stracey about his plan.

He then took Mrs Cheriton, a headteacher at a primary school near Bicester, for a walk with their chocolate Labrador Tia.

He chose a certain route so that she did not see the proposal until the field opened out in front of them as they walked out of some woods.

Mrs Cheriton, 50, who was given away by her sons Daniel, 24, and Josh, 22, said the presence of the sprayer at the ceremony caused a stir.

“It was a bit unusual,” she said. “It was certainly a talking point. Quite a few people gave us the thumbs-up and tooted their horns on the way.

“We got a few funny looks on the Stonor Valley road! The registrar was keen for everyone to stay inside when I arrived but he wasn’t able to.

“I’m very glad it was dry because I was concerned at how I would climb up the steps if it was muddy.” More than 50 people attended the ceremony before more joined for the reception at White Pond Farm.

Mrs Cheriton said: “When we got there my friends had colluded to bring along a steam engine called Earl Beatty, which was steamed up in the yard.

“It was an absolutely cracking day surrounded by friends and family, with lots of dancing to my son’s band.”

The couple, who have been together since 2015, are spending their honeymoon in Somerset.