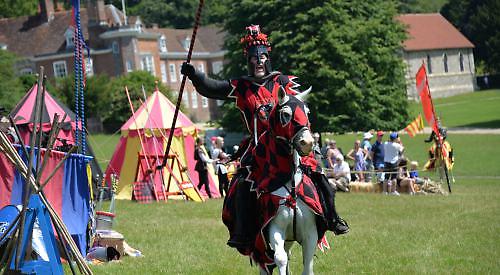 KNIGHTS on horseback battled it out as the Stonor Park estate hosted its first ever jousting tournament.

About 3,000 visitors attended the event over the weekend.

In a nod to the Stonor family’s medieval heritage, one of the knights on the blue team was named Thomas de Camoys, 1st Baron Camoys, for the occasion and the tournament took place on his land.

Together with his team-mate Sir Sam of Hever, he faced the red knights, Lord Ashley of Hampshire and Sir Jasper.

In reality, the 1st Baron Camoys, Thomas de Camoys, commanded the left wing of the army at the Battle of Agincourt.

As well as a series of jousting matches, the Knights of Royal England also took part in challenges including lancing “heads” placed on the ground.

The action sparked a series of fights on foot between the knights, armed with swords and axes, in an arena. Visitors were encouraged to support or heckle them. A squire was “punished” and made to sit on top of the fence separating the jousting competitors before being knocked off by one of the knights armed with a lance.

Other attractions included falconry displays, archery as well as a hog roast and venison burgers.

Jane Lee, marketing manager for the estate, said: “Considering Saturday was such a hot day and everyone wanted to stay in the garden we were very pleased with the turnout and Sunday was very, very busy. We had lots of children and it really was a family day out. It was a first for us and we were really delighted with it.”

The Stonor family have been custodians of the estate for more than 850 years and Mrs Lee added: “The house goes back to the 12th century so to see these knights on horses at the front made you think back all those centuries. You were getting a feeling for how it must have been.”