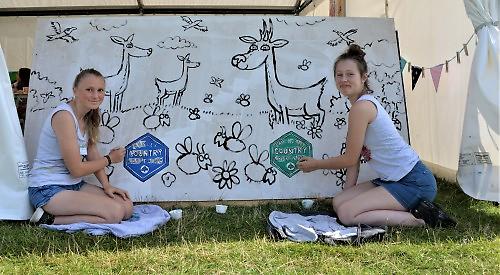 There were more than 150 stalls at the event, which took place over the entire August bank holiday weekend. There were also demonstrations and workshops in traditional art forms.

New attractions this year included a clay pigeon shooting range with guns that shot infra-red beams at their targets and a petting zoo with a pony, lambs, goats, ducklings and rabbits.

There was a communal mural which children could decorate as well as workshops in painting, pottery, candle making, silver clay jewellery making, weaving and more.

Children could ride on traditional wooden swing boats or a hand-turned carousel built in 1901 and there was a stage with live performances by Adam Isaac, who appeared on the first series of The Voice on BBC 1, Steph Willis and jazz duo Matt Lush and Flo Pugh.

Ticket holders could also explore the main house and gardens and children could enter its Wonder Woods adventure playground.

As part of the event the Stonor family, which owns the estate, accepted a donation of several “bee bombs” from the Make A Beeline project, which had a stall.

These are rounded containers filled with the seeds of bee-friendly species which have been planted in the grounds.

Ailsa Stonor, whose husband William is heir to the title of Lord Camoys, said: “It went absolutely briliantly and was one of the best years we’ve ever had.”

A spokeswoman for ICHF Events, which organised the show, said: “It was very successful as it was really busy all weekend and, judging from the feedback we’ve had, everybody had a great time.

“They really liked the new attractions and felt there was lots for everyone to watch and take part in.”