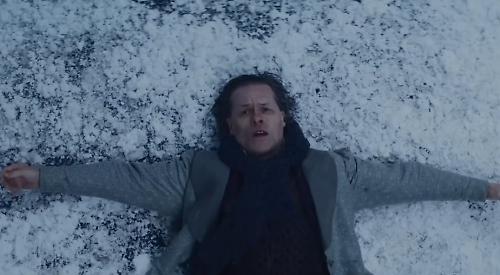 A COUNTRY estate near Henley is to feature in the BBC’s forthcoming dramatisation of A Christmas Carol.

Scenes in the adaptation of Charles Dickens’s classic novel, which stars Australian actor Guy Pearce as Ebeneezer Scrooge, were shot inside and in front of the main house at Stonor Park.

Filming took place over about 10 days in May, during which the estate was closed to the public and the front lawn and entrance to the building were covered in a thick layer of artificial snow.

The content of the scenes is a secret but they will feature Pearce and his co-star Andy Serkis, who played Gollum in the Lord of the Rings trilogy, as the Ghost of Christmas Past.

The Hon William Stonor, who is heir to the estate, says he is looking forward to watching the first episode when it is broadcast next week as he and his children, Tommy, 12, Harry, 10, and six-year-old Cecily, may appear as extras.

Location scouts for the programme, which was written by Peaky Blinders creator Steven Knight and produced by Ridley Scott and actor Tom Hardy, approached the Stonor family in March and visited twice before agreeing to film at the 16th century house.

About 30 members of the production company’s art department arrived two days after the estate hosted its annual Supercar Sunday rally.

They cleared all the gravel from the huge driveway in front of the house before laying down a large, thin sheet.

Then a team from Snow Business, a specialist contractor to the film and TV trade, spent several days laying the “snow” which was made from degradable wood pulp and could be cleared afterwards by wrapping up the sheet.

Filming took place in one room of the house so the family had several valuable artworks on the walls put into storage.

The crew installed props as well as a “green screen” background to allow computer-generated effects to be added later.

The house was also scanned with lasers to create a three-dimensional computer model so that more fake snow or other changes could be superimposed. The scenes, which involved more than 100 actors and crew members, were then shot over the following week.

The interior scenes were filmed during the day while the outdoor ones were shot at night with lights hung from three giant cranes to simulate moonlight.

Mr Stonor said: “The location manager was aware of Stonor and thought it would be a good fit and the rest of the crew seemed to like it straight away. There was a discussion about how certain ideas would work and they felt there was a lot they could do.

“One of the biggest challenges was making it look like the middle of winter just two days after Supercar Sunday. We’d had 5,000 people on site with a marquee, fencing, toilets and so on and it all had to come down.

“It took days and days to lay all the snow because there was so much of it. We were concerned about the environmental effects so we appointed our own consultant to look into it and thankfully it wasn’t damaging.

“I was amazed at how cleverly it was done and it was so strange to see the estate covered in ‘snow’ in late spring. Although we were shut, walkers could see it from the footpath and I’m sure the village eventually knew about it.

“It was a very labour-intensive task because they had to take up all the gravel first, otherwise it would have been impossible to pick up all the snow afterwards.

“They paid incredible attention to detail. One problem was that the roses in front of the house were in full bloom so they tied each one very carefully in a hessian cloth which they took off when the filming was over.”

Mr Stonor and his wife Ailsa watched the entire shoot to ensure the house was properly looked after. This entailed three shifts of daytime shooting and three night shoots from 9pm to 6am the next day.

He said: “With that many people in the house, you always want to keep an eye on things and also to give the okay if they want to change the way they’re filming anything.

“I’m pleased to say they were a delight to work with and very respectful throughout their stay — they took enormous trouble to look after everything properly and did a phenomenal job of clearing up afterwards.

“Andy comes to a lot of our events so it was nice to catch up with him and it was a real pleasure to meet Guy.

“I was slightly pinching myself as I grew up watching him in Neighbours and he has done so much since then. I had a good chance to chat with them between shots and they were both really lovely. I hope they enjoyed their time here but it was hard work for them — they spent many hours just getting their make-up and costumes sorted out every day.

“It was tiring doing the night shooting but I wanted to be there in case they had any questions. I didn’t realise it was just like a full working day in reverse with breakfast served at 9pm, lunch at 2am and dinner just after 6am.

“It was pretty surreal and at one point I turned to Ailsa and said I couldn’t quite believe it was happening. I felt pretty jet-lagged afterwards and was all over the place but I frequently fly to China so at least I’m used to the sensation.

“I can’t give details but there were some incredible scenes and we’re absolutely dying to see it when it comes out. People with a keen eye might spot us as extras in one scene but you don’t know if it will make the cut.

“The children are excited too but it’s very much a ‘post-watershed’ adaptation so we’ll have to record it and check that it’s suitable first.”

The estate and house most famously appeared as a secret MI6 base in the 1987 James Bond film The Living Daylights. It also appeared in the 1989 adaptation of Roald Dahl’s Danny The Champion Of The World and more recently in an episode of Endeavour.

A Christmas Carol was also filmed at Rainham Hall, a National Trust property on the London and Essex border, and the former Lord Leycester Hospital in Warwick. The first episode will be shown on BBC 1 at 9pm Thursday.