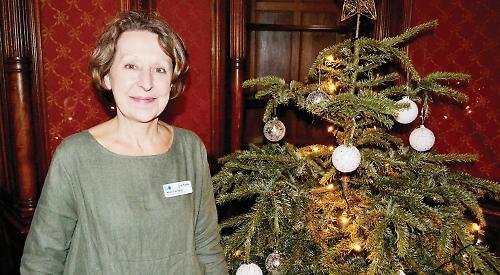 ALISON CLEMENTS says she has found her true calling.

She is the head of befriending at the Sue Ryder hospice in Nettlebed, a role she took on when the service was set up in July last year.

She co-ordinates a team of 15 volunteers who look after patients with less than a year to live.

The volunteers visit patients in their homes to give practical, social and emotional help.

This can range from simply being a listening ear that allows patients to share their fears to taking them out shopping, for a coffee or on a leisure outing.

Patients may already be registered at the hospice but can also be referred by their GP or refer themselves. Anyone with a terminal condition is eligible and there is no charge.

Those who sign up have an initial meeting with Mrs Clements, who finds out more about their personality and interests before deciding which of her team would be the best match for them.

Many are elderly and have no other means of regular support because partners and friends have died and younger relatives don’t live in the area.

Others are younger but their families work during the day so the patients are left alone for many hours at a time.

Mrs Clements says: “It’s important to find someone who is compatible for each patient and that’s been surprisingly easy despite the fact that I only have an hour or so to get to know them.

“I always get a very strong sense of who among my group they’ll get on with best.

“So far I haven’t had any requests to switch befrienders, which shows how good they are at connecting with a variety of people.”

The befrienders typically work about three hours a week and only care for one patient at a time. In many cases, following a death, they take a short break to reflect before taking on another.

They meet together once a month to give each other emotional support and regularly discuss their thoughts and feelings with Mrs Clements, who in turn is supported by other staff at the
hospice.

Mrs Clements says: “There’s a very strong team spirit and if someone has to stop for a while, whether it’s to have a break or to deal with a family situation, others will always step in for as long as necessary. We stay in touch with one another and make sure people feel ready to return to work before doing so. It’s a very stable group and people do keep coming back because they can see the enormous value in what they’re doing.

“It can be difficult because the end point of the relationship is when the patient dies, whether that’s within a matter of weeks or months.

“Sometimes befrienders need some time off because they feel it would almost be disloyal to get straight back into it — they want to honour the connection they had with that patient and not feel like they’re just providing an ordinary service.

“They know from the outset that they’re embarking on a short-term relationship and in that time they learn many personal and sometimes distressing things about the patients’ lives.

“It’s very important that they don’t feel alone so I’m always available for telephone calls and we get together frequently. They can learn a lot from one another about various situations they may encounter in future.”

Patients and befrienders do not follow a set routine but are free to decide how they spend their time together. Mrs Clements says: “If the patient doesn’t want to go out or physically can’t, they might stay at home chatting, reminiscing about their lives or writing letters to loved ones.

“It can be very helpful to go out shopping. Many of us see it as an inconvenience and would rather shop online but it’s good for patients to go out and choose their own items.

“Coffee is often a big part of the relationship. It’s a chance to watch the world go by and, just as importantly, feel like they’re a part of it because they can feel quite cut off from everything. A lot of people like to go to garden centres and think about what they might plant in their gardens. They may not be around to see it grow or come into bloom but it exercises their creative side.

“They may also want to visit somewhere important from their past or go somewhere they’ve always wanted to see before they die. It isn’t a medical intervention but it gives them the simple things we take for granted, even if it’s just having fun and laughter with another person.

“Friends can be too busy to ask for lifts or other help but we make sure patients realise that the befrienders are there for them and will do their absolute best to help them do what they want. One patient was an avid reader who was finding it hard to read but really wanted to continue.

“One of our befrienders has the most beautiful voice and agreed to read to them out loud, which they were thrilled with. As that relationship grew, the patient felt more able to go out so they started taking a few trips out and now they’re writing a guide to cream teas in the Henley area together.

“On the whole, patients are referred to us when they’re more able to do things and that’s really helpful because the trust is there when they begin to decline.

“Sometimes they come to us because of pressure from their families and there’s initially a bit of resistance because they don’t want to feel like they’ve taken on a ‘babysitter’.

“However, they eventually develop really strong relationships and I think that’s down to the quality of our befrienders. They’re warm and thoughtful people who respond well to others in difficult situations.

“Patients often say they can’t believe such a service exists and really look forward to their visits. Many who were initially reluctant say they are so glad they gave it a try. It can be difficult for some people because they feel like it’s an admission of failure if they’re struggling but it’s my role to help them see it as a normal thing. We can all end up on our own and in need of other people’s help — it’s just down to circumstances and shouldn’t be a reason for shame.”

Mrs Clements, who lives in Long Wittenham and is married with a grown-up daughter, studied psychology and sociology at Brunel University, then trained as a psychiatric nurse at the Royal Maudsley Hospital in Beckenham.

In 1990 she became a researcher at the University of Oxford, where she would interview cancer patients about their experiences of treatment. She worked there for 25 years before coming to Sue Ryder, where she works three days a week.

She says: “I applied for this role as I had a lot of experience dealing with cancer patients, although that isn’t the only condition that Sue Ryder provides for.

“It was a chance to make a real and immediate difference — I thought there was no greater point at which you could have an enormous impact on people without friends or family to turn to.

“I accepted half of my previous salary to work here but would never go back to anything else. It was such a right move for me and I think this is the last job I will ever have. It’s the culmination of everything I’ve trained for and all the skills I’ve acquired throughout my career.

“However, it wouldn’t mean anything without my volunteers and they are fundamental to making it work. I feel vastly proud of the team and can’t heap enough praise on each and every one of them.

“For me, the hardest thing is when someone is referred to us who doesn’t actually want a befriender. You can see their reasons and rationale but part of me wishes they would just give it a chance. It has happened once or twice — sometimes people feel low and depressed and can’t see the point but it’s sad if they can’t take advantage.

“The relationships vary in their degree of sadness. Some people find it very difficult to accept that it’s the end of their lives but you cope by focusing on whatever difference you can make, however small it may be. It prevents you from being overwhelmed and there’s always a colleague to turn to for support.”

Mrs Clements hopes to expand the service and is advertising it at GP surgeries. As it grows, she will need more volunteers to keep up with the extra demand.

She says: “There’s no waiting list at the moment and I want to keep it that way, even if that means some befrienders aren’t always matched to someone.

“ I wouldn’t want anyone to not be able to access the service. In that sense it’s a bit of a juggling act as we want to help more people but need to ensure we have the resources to do so.

“Volunteering is great because it means so much to alleviate thae loneliness or isolation that any of us may experience at some point in our lives. It seems like such a simple act but it makes a huge
difference.”