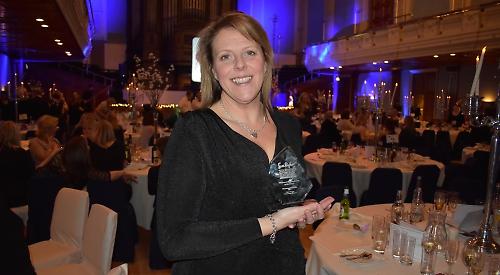 Women from the Henley area were among those honoured at the Sue Ryder Women of Achievement Awards.

The 12th annual awards were held on Friday (16) at Reading Town Hall.

The ceremony, which was compered by former Reading and Wales footballer Ady Williams, was attended by more than 250 people and raised more than £63,000 to support the charity’s hospices in Nettlebed, Reading, Newbury and Wokingham.

Among the winners was GEMMA LEVY, a parent and former pupil of Chiltern Edge School who helped defend it against the threat of closure.

Mrs Levy, 36, of Hardy Close, Caversham, whose sons Jack and Alex attend the secondary in Reades Lane, was nominated by her sister Sarah Northall in the education category.

She founded the Save Our Edge campaign with former schoolmate Charlie Holloway when the school was threatened with closure after being deemed “inadequate” by Ofsted and placed into special measures in April last year.

It has since appointed a new headteacher and is in discussions to become an academy.

SUZANNE STICKLEY, who founded a first aid training course in Henley, picked up the award in the services category.

She launched First Aid Matters, which is based at the Chiltern House Business Centre in Station Road, after one of her two sons had an accident involving boiling water in 2012.

Along with trainers Steve Ambler and Yolanda Mates, she has delivered thousands of training courses for individuals, families and corporate clients as well as providing specialist teaching for nannies, teachers and first aiders at sports matches.

They also run the First Aid Theatre Company, a workshop for children who dress as medics, perform hands-on exercises with classmates and dummies and listen to mock 999 calls.

ANN MANNING, who has run independent insurance broker Manning UK, of Reading Road, Henley, for more than three decades, was the winner in the community category.

Miss Manning, 65, who was nominated by Aspen Weatherburn, of Albert Road, Henley, launched her business in 1984 and now employs 12 staff specialising in motor insurance, commercial policies and cover for high-value items such as jewellery, artworks, boats and aircraft.

She also supports the Henley 60+ Club, the Samaritans, Henley in Bloom, the Caversham Townswomen’s Guild and Caversham Rotaract Club and played an active role in the restoration of the Chantry House in Henley about eight years ago.

Double world champion and Olympic bronze medallist SARAH WINCKLESS was the winner of the sport category.

Winckless, who was made Henley Royal Regatta’s first ever female umpire in 2016, won bronze in the women’s double sculls at the 2004 Olympics in Athens and gold at the world championships in 2005 and 2006 with the GB women’s quad.

After retiring from the sport, she became the first chairwoman of the British Olympic Association’s athletes commission and started umpiring.

Winckless, 44, who now lives in Hurley, also sits on the board of the UK Anti-Doping Agency and is heavily involved with Huntingdon’s charities after being diagnosed with the disease in the Nineties. She was made an MBE by the Queen in 2015 for services to sport and young people.

Ms Harley, who lives in Buckinghamshire, has worked at Sue Ryder for more than 18 years and regularly works over the Christmas period, starting as early at 7am to prepare dinner for patients.

Her husband Neil died from cancer in 2010 and she cared for him at home, the only time she has missed Christmas at the hospice.

She was also awarded the Robyn Jones Award, picked from the winners of the seven categories.

BRENDA LONG, chairman of Reading solicitors Blandy and Blandy, won the business award for her work in leading the company, despite giving birth to a baby boy as a surrogate mother last year.

TARA WINDSOR won the courage award after donating a kidney to a close friend suffering from a serious illness.

Gemma Wise, Sue Ryder senior community fund-raiser, said: “The event was a resounding success and we couldn’t have done it without all our sponsors, attendees and volunteers.

“It was such an enjoyable experience to recognise and celebrate the contribution so many remarkable women make within this region.”

For a full report and pictures see this week’s Henley Standard.