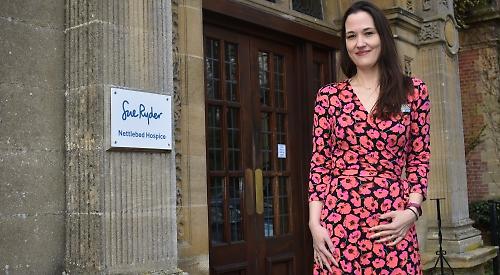 PATIENT demand for end-of-life care at the Sue Ryder hospice in Nettlebed has decreased by 12 per cent over the past four years.

In the same period the demand for nurses to visit patients at home has more than doubled from 578 visits to 1,619 this year.

These statistics are one of the key reasons for the charity’s decision to sell the building in the next two years, as exclusively revealed by the Henley Standard last month.

The sale is subject to the successful trial of its “hospice at home” service in which more of the charity’s specialist nurses will visit patients at home if that is what they want.

The new programme goes live on April 9 with the opening of a new phone line to nurses to provide specialist advice or rapid response care.

Holly Spiers, Sue Ryder’s executive director of hospices and fund-raising, has drawn up the plans over the last eight months in conjunction with the Oxfordshire Clinical Commissioning Group.

About a year ago she began assessing how the charity was looking after patients at its seven hospices across the country.

A pattern emerged showing that more people wanted to be cared for at home rather than a hospice.

Sue Ryder’s data also showed that the drop in bed occupancy at its hospices was the largest at Joyce Grove.

The new system means there will be a single point of access to care for end-of-life patients in conjunction with the 111 urgent care service, provided by a Sue Ryder team.

Initially the service will cover the south-east of Oxfordshire, including Henley, Sonning Common, Wallingford and Thame. If this is successful, it could be rolled out to the south-west of the county, covering Faringdon, Wantage, Didcot and Abingdon.

Mrs Spiers says: “We spoke to the clinical commissioning group about the issues they were having and they were the same [as ours].

“They have people stuck in hospitals but they can’t get them home because they don’t have enough community support. People need support for longer because those suffering with end-of-life diseases are living longer. Now they need different types of support.

“People can come into the hospice for five or 10 days of symptom management or they can come in for their last days and that is what most people need.

“We want people to live their lives as fully as possible and most people want to be at home with their loved ones. We can be flexible about going out to people.

“The people on the phones are not going to be reading off a flow chart. It will be a nurse who can support the patient and answer a query. As a disease progresses, there will be more nursing intervention and it will flow depending on how the patient feels.

“We will be able to send out nurses and complementary therapists with all work they do here now and then there are beds as a back-up if it gets complex. We can still do that.”

If the trial is successful, Sue Ryder intends to move the running of the services from Joyce Grove to a “community hub” and provide beds elsewhere, possibly from several locations.

In 2014 the hospice was due to move into a purpose-built, 12-bed facility on the top floor of the new Townlands Memorial Hospital but the charity pulled out before construction had begun, saying it would have needed another property for its other services and outpatients.

Mrs Spiers insists the move would not have made financial sense.

She says: “We looked at Townlands and it was not sustainable for us and we took the decision to not move in. We would have been moving from one expensive building to another. As a charity, we have to be careful how we spend other people’s money.”

She says the charity would still be open to the idea of using it as a base for beds but adds: “It would need to be on different terms.”

Sue Ryder says that its decision to leave the Nettlebed hospice was not only about costs but also maintaining the building and its increasing impracticality.

Joyce Grove has 27 acres of grounds and was built in 1908 for merchant banker Robert Fleming, grandfather of James Bond author Ian Fleming. It has been run by Sue Ryder since 1979.

The ward has seven single rooms, one triple room and one double room and only takes up a small part of the building.

Sometimes the beds in the shared rooms are left vacant as patients of both genders are not allowed in the same room.

Mrs Spiers says the grounds are often cited as a benefit to the patients but in fact they can’t access them.

She says: “This is an old building which was never designed for care. There are challenges around fire safety, maintenance and accessibility for patients and they are not able to go outside.

“This building is huge but the care is only in a small part of it.

“We have to staff the ward as though it is full because we don’t know how many people are going to be admitted but then the community referrals have been going through the roof.

“Staff can’t come off the ward because it would make it unsafe.

“We have delivered outstanding care here and the nurses who work here are incredible. They work around issues which we would not think twice about if they were working in a new building.” Mrs Spiers says the community outreach work currently held at Joyce Grove could be moved to the new hub or held at hospitals.

The clinics provide specialist advice and therapies for those who are terminally ill.

Some patients have flagged concerns about this being lost when Joyce Grove is sold but Mrs Spiers says the change could in fact make the outreach services easier to access and available for more people if they were held in several locations.

She explains: “We understand social aspects are really important but the clinics can be run from a community hub and community hospitals, which would make it more equitable.

“Access to Nettlebed can be very difficult if you live on the boundary of the catchment area.

“For years Nettlebed has been the focus of everything. This is changing the focus as the majority of care will be in the community and in people’s homes, which is where people want it. The beds are there if they need them.

“People want to be cared for at home and to spend time with relatives but to provide what they want we have to do things differently.

“To patients using our services now, the beds will remain until a solution is found and that could be any time in the next two years.

“We will not move until we find a location we believe offers patients what they need and what they want. We will be liaising with those who use the services now.”

Mrs Spiers expected some people to be unhappy about the change but has found the staff to be supportive.

“A lot of the nurses are quite excited about working in a different model and maybe going out to do some community work or supporting on the 24/7 telephone line,” she says.

“They have a real pragmatism because they have worked around the quirks of this beautiful building for many, many years.

“I don’t think a single person would say this is an ideal place for end-of-life care.

“If there are people in the community who thought they may be cared for at Nettlebed, I would say the care is not about the location but the ethos of what we do.

“It’s about our nurses who go the extra mile and we can provide that in your own home or bed in different locations. This is a building, it is not care.

“I would say we are now supporting care in the long term and providing more care to more people and for that care to continue to be outstanding.”