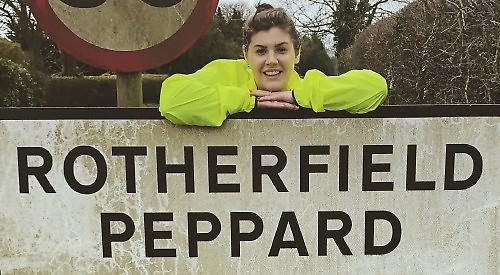 A WOMAN raising money for Sue Ryder by taking part in the Reading half marathon used her initiative when the event was cancelled.

Hannah Carter, 24, ran between two of the charity’s hospices, a distance of 12.6 miles and only slightly shorter than the half marathon at 13.1 miles.

Mrs Carter and her husband John, of Grove Hill Close, Emmer Green, were due to run the Reading half marathon last month before it was cancelled at the last minute due to snow.

Instead they ran from the Sue Ryder hospice in Nettlebed to the Duchess of Kent hospice in Reading in two hours and eight minutes.

Mrs Carter was running in memory of her mother Mandy Wheatman, who was cared for at the Nettlebed hospice before her death from a brain tumour, aged 46, in 2010.

It was the third of 12 acts of kindness that she is carrying out each month this year in aid of Sue Ryder.

Mrs Carter, who raised more than £500, said: “We had a lot of sponsorship and didn’t want to let anyone down.

“My brother came up with the idea of running between the two hospices.

“I roped my husband into running with me and we did it on a free day we had together. We took pictures on the way to prove that we actually did it and didn’t drive the route. I was chuffed with my time, particularly as we stopped to take pictures.”

In January, Mrs Carter’s act of kindness was to sign up as a volunteer at the Nettlebed hospice, doing administrative work and chatting with patients.

In February she helped organise lots for an auction at the Sue Ryder Women of Achievement awards. These helped raise £3,000.

For her April act of kindness she organised a fun day for children at the hospice on Sunday.

Mrs Carter is also due to start work as a fund-raiser for the Duchess of Kent hospice in May.