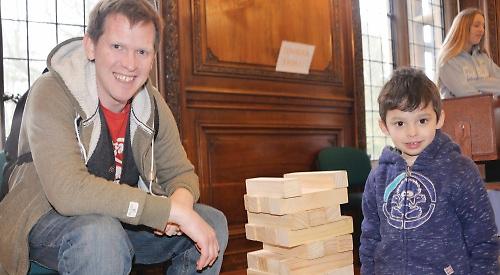 A CHILDREN’S bunny trail raised £383 for the Sue Ryder hospice in Nettlebed.

The event was held in the grounds of Joyce Grove, where youngsters had to go round finding and solving clues and riddles.

Indoors there was a tombola, colouring, Easter crafts, giant Jenga and tea, coffee and cakes for sale. Hannah Carter, from Emmer Green, who organised the event, said more than 70 children took part.

She was helped by some of the charity’s volunteers, her husband John and friends Laura Pearce, Abi Mahoney and Amy Nicholl.

Mrs Carter, 24, said: “It went really well but I think we could have done even better if the weather had been better. The n we had from parents was really positive and they said the children enjoyed it.”

Mrs Carter is completing 12 acts of kindess this year, one for each month, and this was her one for April.

She is raising money for the hospice where her mother Mandy Wheatman was looked after before her death from a brain tumour in 2010. Her previous acts of kindness included a 12.6-mile run, organising lots for an auction and volunteering for the charity, doing administration work and chatting to patients.

Mrs Carter will be holding some sort of family event next month, when she is also due to start work as a fund-raiser at the charity’s Duchess of Kent hospice in Reading.