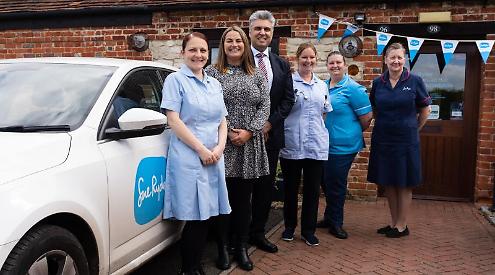 A HOSPICE charity has launched a night-time service for the Henley area.

This has been made possible by a “substantial” donation by a charitable trust set up on the wishes of a former mayor of Henley, Anthony (Tony) Lane.

It means a member of Sue Ryder’s “hospice at home” team will give one-to-one care to existing patients already in receipt of a care package between the hours of 10pm and 7am.

The charity hopes to launch the service soon and is now recruiting new staff, including nursing assistants.

Sylvia Thomas, head of quality and clinical services, said: “For families with a loved one who is dying, night-time can be an especially worrying and difficult time when they feel isolated or exhausted.

“Our new overnight service will ensure we can be there when it matters for our patients and their families no matter what time of day it is, providing them with the reassurance that their loved one is in the care of a skilled member of the hospice at home team, while they can take some much-needed rest.

“Sue Ryder’s aim is to be there when it matters for our patients at the most difficult times of their lives, providing a truly holistic package of care to meet individual need.

“On average, only 30 per cent of palliative care provision in the UK is funded by the Government.

“It is our fantastic supporters who fundraise for us so tirelessly and partners such as the Anthony (Tony) Lane Foundation who make it possible for us to provide the care that we are so well known for.”

Anna Burnside, a trustee of the foundation, said: “We are delighted to support the new Sue Ryder night service for the benefit of the people of Henley and South Oxfordshire.

“Sue Ryder has provided essential services to the community for many decades and this ground-breaking initiative will ensure that this connection continues long into the future.”

He set up that foundation as a charitable trust in his will and it became a registered charity in June 2016. Since then the trustees have made grants to a wide range of grassroots community groups and voluntary organisations.

The foundation focuses on one of five themes every year. They are: engaging children and young people in Henley; providing for the social wellbeing of the elderly of Henley; Preserving and celebrating Henley’s heritage and history; improving the health of the people of Henley and encouraging new business in Henley.

Mr Lane was made an MBE in 1995 for his contribution to the community. He had lived at the Acacia Lodge care home in Quebec Road at the time of his death.

Sue Ryder’s care hub was launched after it closed its hospice in Nettlebed, saying that demand had fallen and more people wanted to be cared for at home. The building has since been sold to a developer and is due to be turned into flats.