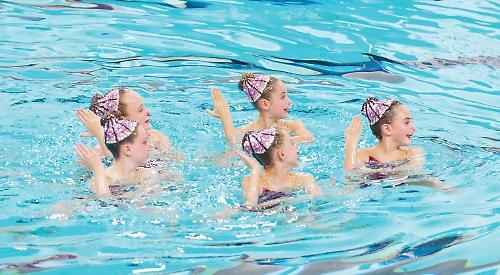 ATHLETES from Henley Synchro Club qualified for the national age groups competition for the first time in 40 years.

Their tight patterns, phenomenal travel and artistic choreography combined with their average figure scores to earn them 12th place out of 13 teams entered.

Their smooth pattern transitions, graceful arm movements and complicated leg actions were performed well but finished in 17th place out of 17 teams.

The 13-15 mixed duet of Charlotte Jones and Oliver Warren swam a moving routine to music from Beauty and the Beast.

Their delicate choreography was a hit with the judges and they loved the interpretation of the music and storytelling the duo managed to portray, earning them a silver medal.

Millie Jones entered the 15-18 figure competition and placed a respectable 73 out of 84 even after earning a two point penalty for executing three full spins instead of two.

Henley Synchro Club started competing at a recreational level five years ago and trains for five-and-a-half hours per week.

To have qualified for nationals is an incredible accomplishment and shows the dedication, motivation and determination of the athletes, coaches and parents.