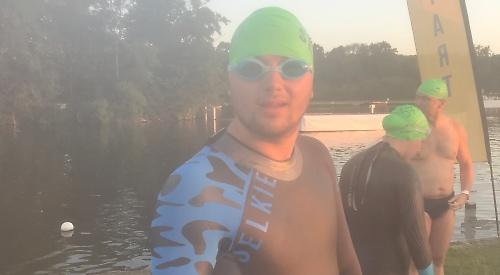 A TEENAGER from Peppard is set to swim the Channel next year.

Henry Bell, 18, of Blounts Court Road, will take on the relay challenge in the summer as part of a team of eight swimmers.

He was invited to join the Tri50 team, based in Buckinghamshire, by former coach Jo Lewis, who was his first swimming teacher.

She made the approach after Henry did well inlast month’s 14km Thames Marathon from Henley to Marlow, which is part of the Henley Swim series.

He finished in three hours, 13 minutes and 21 seconds, putting him in the top 30 out of more than 600 swimmers.

Henry, a student at the Berkshire College of Agriculture, took part in all four Henley Swim events this year and for the first time as an adult.

His best result was in the Henley Mile in July, which he finished in 20 minutes and 17 seconds, winning the 18 to 24 age category and coming third overall.

He also finished in the top 20 in both the Henley Classic and the Club to Pub Swim in the same month.

Henry’s mother Rebecca Bell said that swimming the Channel would be a dream come true for her son.

She said: “Jo heard he had done the marathon in just over three hours and said they were getting a team together and they would like him to join.

“We are going to be doing a lot of training outdoors at Bray Lake for the next year. At this stage it would be tough for him to swim the whole distance so it’s good for him to be part of a team.

“It’s a great experience and is something he has always wanted to do. He talks about swimming around the world or swimming the Atlantic!”

Henry trains at Thame Swimming Club and with Henley Swim to Live at Gillotts leisure centre. He does about eight hours of training each week.

Henry first competed in open water swimming in 2011 when he swam a mile across the Camel estuary in Cornwall for the annual Padstow to Rock swim inspired by his coach and mentor Nigel Downing, also from Peppard.

He recently completed a diploma in horticulture at college and is going to start a diploma in public services later this year.

He also volunteers with Sonning Common Green Gym and helps with tidying the grounds at All Saints’ Church in the village, where his family worships.