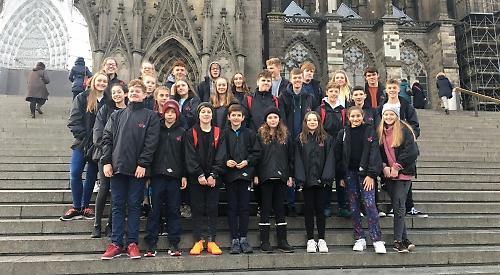 A TEAM from Henley Swimming Club comprising 28 young swimmers and eight adults flew to Germany on November 29 for their annual competition against one of Henley’s twin towns, Leichlingen.

They trained with the Leichlingen swim team and had a trip round the chocolate museum in Cologne followed by a lovely walk around the famous Christmas markets. Then it was an early night ready for the swimming gala the next day.

There were many highs, including some amazing personal best times but the main reason for the trip was for the chance to win the Friendship Cup relay race.

Twelve swimmers swam three sets of medley relays, one after the other, to finish first and win the trophy.

Head coach Sarah Williams said: “It was the first time Henley has won the trophy in Leichlingen since 2006. A big party in the evening summed up a very successful and enjoyable trip.”