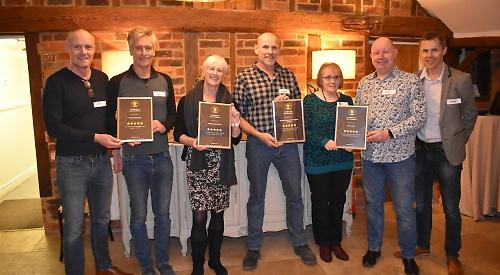 A CELEBRATION was held to say thank-you to the volunteers who help co-ordinate Henley Swim’s annual events.

About 50 guests attended the party at Bix Manor on Friday evening, which was attended by swim co-founders Tom Kean and Jeremy Laming.

This year, all four of Henley Swim’s events received gold in the annual Racecheck Awards, which are voted for by participants in sports events. Mr Laming, 49, from Sonning Common, called the volunteers “invaluable”.

He said: “We have lots of volunteers, probably around 80. They are absolutely critical to us. We would not be able to run without them and we are very lucky to have such a loyal volunteer base who come back year after year.

“Some of them have been helping us for more than 10 years and I’m amazed by their dedication. When we are running the events, there is not much chance to socialise so this is a chance to say thank you to all the people who help us. It is always a very happy evening.”

This year’s events are:

• The Henley Classic, a 2.1km endurance event upstream on the Henley Royal Regatta course, on June 28.

• Outdoor Swimmer Henley Swim Festival, with various events for all abilities and ages, on July 12.

• The Club to Pub swim from Henley Rowing Club to the Angel on the Bridge on July 25.

• The Thames Marathon from Henley to Marlow (14km) on August 16.

The Henley Classic will be raising money for the Starlight Children’s Foundation, a national charity which grants wishes to seriously ill children.