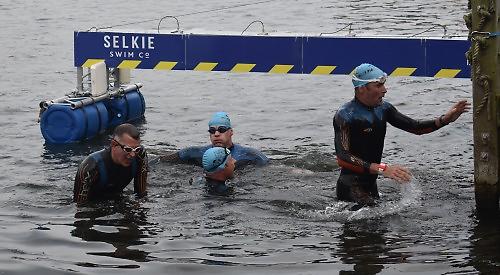 A TOTAL of 750 people took part in the eighth annual Henley Club to Pub swim on Saturday.

The 1.5km challenge, which is organised by Henley Swim, was back on its usual course after a smaller event with 500 people was staged at Temple Island Meadows last year to comply with covid regulations.

Competitors set off from Henley Rowing Club, off Wargrave Road, at 7pm and headed upstream to Marsh Lock, then back down to the Angel on the Bridge in Thames Side with the aim of finishing before 8pm.

They were released in waves according to ability and escorted to the finish line at the pub’s beer garden by a team of marshals in kayaks.

Finishers received a bottle of beer before Mayor Sarah Miller gave them a medal which also served as a bottle opener.

The quartet, who compete as Reading Masters and have an unbeaten record in Henley Swim events, finished in about 20 minutes.

Mr Winter, who won the 2019 Club to Pub individually and was placed second in 2017 and 2018, said: “I’m really pleased that we finished within a few seconds of each other.”

Mr McQuillan added: “It all started with Joel being pretty damn fast, which inspired us to get into the habit.

“It was another great race — we set off close together and drifted apart in the middle but we all joined up again at the end. It was lovely just to be back in the water after the recent hot weather.”

Sarah Barron, 47, of Greys Road, Henley, finished in 35 minutes, about 10 minutes faster than either of her two previous attempts.

She was cheered on by her husband Stuart and children Noah, 12, Raphael, 10, and Martha, nine. She said: “I’m very proud of my time as I’ve been doing some additional training at Caversham Lakes now that it’s open again.

“It was such a fun race and it felt brilliant to finish so I’m definitely going to do it next year.”

Friends Jude Coleman, of Hamilton Avenue, and Bekki Wedd, of Manor Road, both Henley, finished in about 30 minutes.

They would have finished sooner but were among a wave who were stopped by marshals to allow a pleasure boat to pass.

Mrs Coleman said: “It went really well — it was unfortunate that we were interrupted but I’m glad they stopped us because we might not have spotted it. It was only for about a minute but it felt a lot longer.”

Malcolm Burfitt and Mike Wood, who are members of Henley Open Water Swimming Club, finished together in about 24 minutes.

Mr Wood, 44, from Harpsden, said: “I swam the length of Ullswater last Saturday, which is 13km, so this was a little dip by comparison.

“I’ve done it once before and it took more than 30 minutes so I’m pretty pleased, though your finishing time is partly dependent on the flow.

“It’s great to be out doing normal stuff again — you can’t beat a good mass start. It’s more social than time trials and the initial rough and tumble is all part of the fun.” Fellow club member Stephen Gould was taking part just three days after swimming in a three-person relay from Jersey to France.

He said: “I managed to get a few days’ rest but only caught the first flight home this morning so I’m pretty tired.

“It doesn’t matter how I did, though — this is my favourite swim and I love taking part.”

Jack Adamson, 37, from Shiplake, and Rich Robinson, 35, from Wargrave, were taking part for the first time alongside their friend Nick Minnitt, 36, from Henley, who had swum it once before.

Mr Adamson said: “I thought I’d give it a go because it’s right on my doorstep and finishes at a pub.

“I’ve never swum competitively before and my only training was a bit of swimming in the sea on holiday in Pembrokeshire, so I feel pretty good about finishing in 31 minutes.”

Ciara Lee, who lives near Henley and took part for the first time with friends from London, finished in about 35 minutes.

She said: “We were so anxious at the beginning that we actually thought we were coming down with a bug but thankfully it turned out to be just nerves. It went really well once we started and I’m so glad we did it.”

“This was my first time and I just threw myself into it without any training as I was mostly tempted by the free beer.”

He said: “It’s slower than usual but I’m getting older and have been spending more time on my bike since the pandemic started. It’s still a great result and I was pleased just to be taking part.”

George Jewell, 45, of Bell Street, Henley, said: “It was tough going this time because I hadn’t done any training but, to be honest, it’s great to be outside and doing anything with other people after a year of lockdowns.”

The first man back was Tom White, of Surrey, while the first woman to finish was Laura Coulier, from Mauritius.

The evening also included a collection for Sue Ryder, which provides palliative care in the homes of patients in the Henley area.

Tickets to this year’s challenge sold out within a week of going on sale in March.