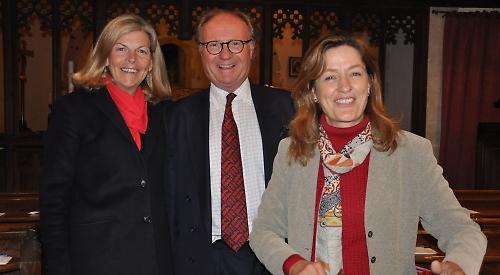 AN appeal has been launched for a new washroom at Swyncombe church.

The parochial church council of St Botolph’s needs to raise between £50,000 and £70,000 for the new
facility at the church, which dates back to the Normans and is Grade II* listed.

The congregation and visitors currently have to use a portable toilet.

John Sennett, a member of the congregation who helps organise the church’s annual snowdrop teas, said: “Those involved with Swyncombe church realise that to keep it viable for present and future supporters a permanent washroom would be a huge asset.

“The washroom must not detract from the beauty of the church and be built of sympathetic materials blending in with the age of the building.”

About £1,300 has been raised so far. Treasurer Jonathan Longley ran the Reading half marathon in March in aid of the appeal and a large group of walkers from Reading were catered for by volunteers with teas and cakes just before Easter.

Dr Sarah Fane, chief executive of the charity Afghan Connection, gave a talk about her work in April.

She has been immunising more than 72,000 women and children a year since 2002, when she founded the charity, and has helped build schools.