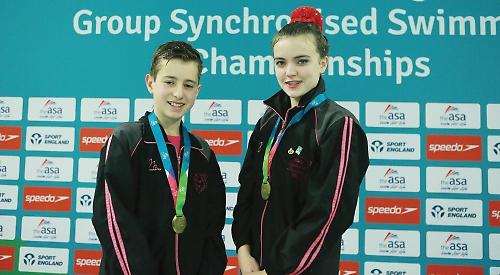 THE Henley Synchronised Swimming Club achieved a good set of results, including a gold medal, at the national age group competition held in Gloucester last weekend.

This is the first year that mixed duets were swum at the competition and five mixed duets entered across the age groups. The Henley 13-15 mixed duet pairing of Amelia Jones and Oliver Warren won the gold with their swim to Everything has changed by Taylor Swift and Ed Sheeran.

Four of the club’s swimmers qualified to swim in the competitive figures section this year. Lucy Jones and Iris Bennett were entered in the 12 and under category and came 19th and 90th out of 150 respectively. In the 13-15 category Amelia Jones and Alexandra Turner came 98th and 119th respectively. In the combination team competition the 12 and under squad of Bethany Davidson, Charlotte Jones, Emma Buckley, Eva Narewska, Francesca Whittle, Iris Bennett, Lucy Jones and Zara Warren swam their Japan-themed routine well and were placed 10 out of 25.