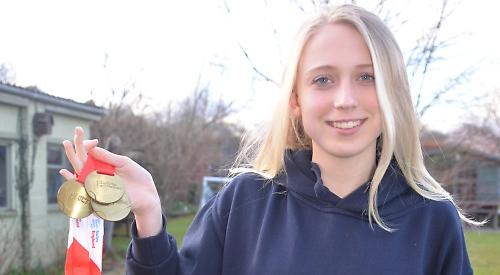 A TEENAGER from Sonning Common has been chosen to represent England at synchronised swimming.

Madeleine Staples, 13, has been called into the national development squad after winning three gold medals in the 12 and under age category at the National Age Group Championships in November.

She came first in the solo section and in the duo section with her partner Rebecca Saunders and was part of the Reading Royals team that won the team category.

She then had to attend a selection event in Bristol, where all the swimmers had to perform a series of technical moves known as figures so the national team coaches could assess their flexibility, stamina, control, extension, speed, stability and uniform motion.

A week later Madeleine learned she was one of four athletes who had been selected for the development squad, which provides extra training and coaching for the most talented athletes in the country.

Madeleine, who attends Gillotts School in Henley, said: “We were in the car on the way to football with my brother Devon when mum got the email. I was in the back of the car so I couldn’t see it. She told me I had got in and I was so happy.”

Madeleine took up the sport aged eight while the family was living in Attard in Malta where her father Dan was then working. One of their favourite activities was swimming and they would go regularly at weekends or after the children had finished school.

Madeleine was a good swimmer and when she was eight when she signed up to have lessons with Saho Hareda, an Olympic synchronised swimming medallist from Japan who had moved to Malta to learn English.

Her mother Hannah, who works at Invesco in Henley, said: “Madeleine was always a good swimmer and a bit of a water baby.”

When the family returned to the UK in 2013, they moving to Newfield Road and Madeleine joined Reading Royal Synchronised Swimming Club, based at the Central Pool in Reading.

She had to learn specific figures and pass grade exams before she was allowed to compete in events. She said: “In Malta I didn’t do anything competitive but once we came here it was really competitive.

“If you want to be in the competitive team then you have to have the particular grade.”

Now she trains almost every day with one-to-one coaching for figures, flexibility coaching and stamina training as well as lane swimming and team sessions.

The Reading Central Pool closed in January so sessions are held at schools with pools including the Oratory in Woodcote, Reading Abbey and Queen Anne’s in Caversham. Pools have to be a certain depth for the team to be able to train.

The training focuses on figures in the early part of the season. The swimmers are judged by the club coaches and then teams are selected to practise routines for competitions.

Mrs Staples, who is now a synchronised swimming coach, said: “They put the teams together based on grades and the swimmers have to compete against each other to win a place in the team.

“They are then put together and the coach picks a piece of music for them to swim to and they will begin learning a new routine, which is a lot more fun.”

Reading Royals are one of the country’s top clubs and are coached by performance director Kelly-Anne Russell, a former Great Britain synchronised swimmer.

Madeleine said: “She used to be a swimmer at the club, then a volunteer and now is the performance coach. She’s one of the best choreographers in the country.”

The National Age Group Championships are held over two days at the end of each season.

Madeleine’s selection for the national squad means she will attend a week of intense training during each school holiday as well as over eight weekends. This takes place at Aldershot Garrison sports centre.

She said: “There are eight of us in the development squad and we do routines, extra figures practice and extra work to build up our fitness.”

Mrs Staples said: “They definitely push them. It’s a completely different level of training to the club sessions.

“I can’t believe she has reached this level and it’s wonderful for her to be part of it after all the hard work she has put in.”